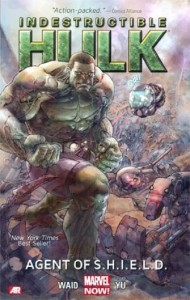 Bruce Banner has been fighting the monster within ever since the Gamma Bomb turned him into the Incredible Hulk. The meek scientist has been looking for a cure for years. He hates the damage that The Hulk causes every single time he is unleashed.

Banner realizes that The Hulk is indestructable and has come up with a plan that he can live with. He joins S.H.I.E.L.D. so he can be a weapon whenever he hulks out. They simple have to point him in the right direction so he can battle evil forces. In return, he gets a lab and a team of scientists to work on things to benefit humanity. 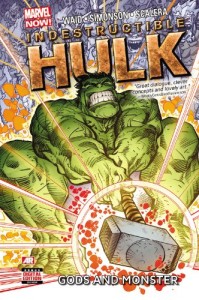 This was a really fun graphic novel. The Hulk actually lifts Thor’s hammer, as if he wasn’t dangerous enough without it. There is a lot of comedy in this issue as well. I loved it! 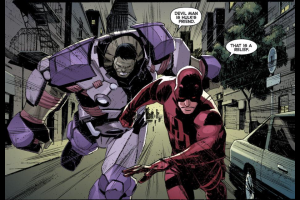 That was a pleasant surprise and made for a great read. Maybe it tied into the fact that both Daredevil and Thor were featured in the old Incredible Hulk television series. Why not have them both back in a graphic novel too? 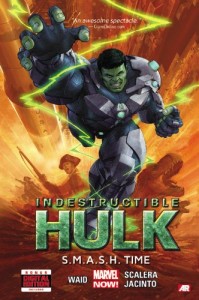 Time is broken and to make things worse, someone is messing with The Hulk’s past. Bruce Banner beams his consciousness into a robot probe so he can control The Hulk, the only being strong enough to travel through the time distortions and set things right.

The Hulk meets up with the knights of Camelot, dinosaurs in the Old West, and even pirates on the open sea. It’s another great adventure in this series that I am really enjoying. 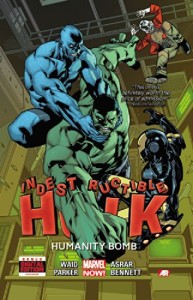 There is a global threat that Bruce Banner thinks he can alleviate with his latest scientific creation. Before he can set his plan in motion, he hulks out and is running around town with a giant bomb.

Ant-Man and Iron-Man are worried what the monster will do and feel the need to stop him at all costs. But did Banner have the right idea all along? And could this bomb help counteract the Terrigen Mist that threatens humanity?

I have really enjoyed this series so far and look forward to reading more of this title.

A Quality of Light – A Great Read

The King of Rock-Bottom