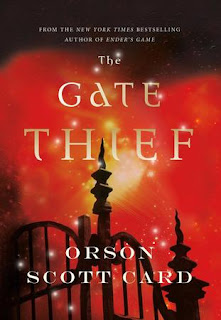 This was sitting on the new arrival shelf at the public library. I picked it up because I have always enjoyed Orson Scott Card’s work. I love his work in the genre of science fiction and the medium of comics and I did read one of his urban fantasy novels last year. So, I thought I’d give this one a chance.

I have never been much for fantasy as a genre, but urban fantasy is much more accessible. I like the fact that the tales are set in modern times. They involve magic and all sorts of unusual people with mysterious powers. This story is no different.

It revolves around Danny North, a high school boy, who is able to open up portals (or gates) that allow him to transport himself or anyone to any location he chooses. It turns out that this is an old art as well. But no one has made a gate in quite some time after The Gate Thief closed all of the portals to end an old war.

Danny opened one without evening knowing what he did. And the war is immediately rekindled. He gets some help from his non-magical friends and from The Gate Thief himself, but can he count on him?

I won’t give away any more of the story, just in case you want to read it.

I didn’t know that this was the second book in a series but it didn’t stop my enjoyment of it whatsoever. There were a few moments near the beginning where I thought I was missing something, but as I read on, it was easy enough to catch up to the story. It really did stand on its own as well.

Questlove is on a Creative Quest

Guardians of the Galaxy: Cosmic Avengers