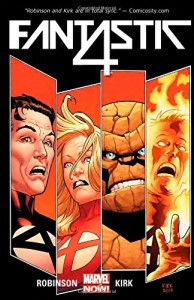 This graphic novel collects the first five issues of the 2014 series of Marvel’s First Family. The story begins with swarm of monsters invading the city. Of course, the Fantastic Four get blamed for all of the destruction. To make matters worse, Johnny Storm loses his powers in the battle.

Sue and Reed get put on trial and have their children taken away from them. And believe it or not, that is just the start of their downfall. 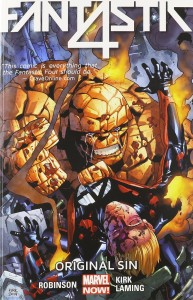 Ben learns a secret that infuriates him. He leaves the team in anger and ends up getting accused of murder. Things are looking pretty bad for the Fantastic Four. Is there a connection between all tragedies? Is someone trying to bring an end to the team? 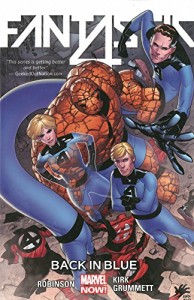 Fantastic Four: Vol. 3 – Back in Blue

Just when things couldn’t look any more glum, the team reassembles with their classic uniforms. They will fight to the bitter end and find out exactly who has been behind the unraveling of their lives. 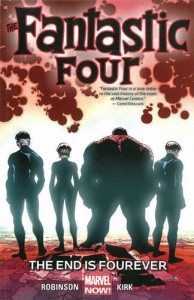 The ultimate battle between the evil genius who has been working for years to unravel the Fantastic Four and our fearless heroes comes to a head in this issue. The story concludes the series of this comic, but I really don’t think it is the last we will see of FF. The End is Fourever . . . but so is The Fantastic Four.

The Fall of the Fantastic Four