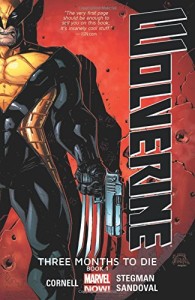 Wolverine has lost his ability to heal. He goes on like nothing has changed, but he knows that everything has.

He confided to Ms. Marvel that it was the only power really worth anything. 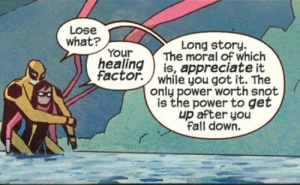 Wolverine needs his healing ability. Every time he uses his claws they pierce his skin and when then retract, they could potentially expose him to infection. I love how this comic series addresses how much of an issue that is for him right now. It’s scary. 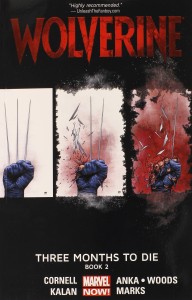 Wolverine confronts Death himself in this story. Death seems to help him get over his fear of continuing to be a hero despite losing his super-powers.

When things look bleak, Wolverine calls for a little bit of back up. Nick Fury shows up with S.H.I.E.L.D. agents and The Avengers to help save the day. He says, “You know what your best super-power is, old man? That you’ve got so many friends.” 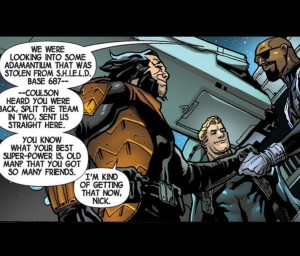 Unfortunately, in the end, Wolverine is going to die alone. 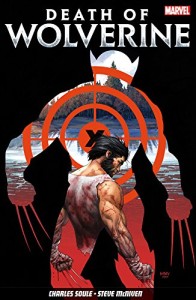 This is Wolverine’s final battle. Even without his healing ability, he continues to fight like he is immortal. He puts everything on the line to protect the lives of others and to stop a terrible evil from being unleashed.

This four issue mini-series was a fitting end for our Favourite Canadian Super-Hero.

Hitchhiker’s Guide to the Galaxy Part 6 (of 3)