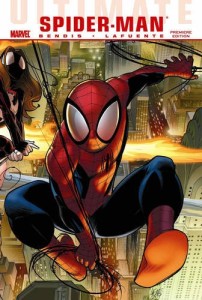 Ultimate Spider-Man: Volume 1 – The World According to Peter Parker

The Daily Bugle has gone completely digital, Peter Parker is working at a fast food joint, and Gwen Stacy is living with him and his aunt. To make matters even more complicated, Johnny Storm aka The Human Torch and Bobby Drake aka Ice Man have moved in as well. Aunt May loves having all these teenagers in the house. They pose as her nephews and have to refrain from using their powers (house rules). And Mysterio is back trying to take over the Kingpin’s criminal empire. 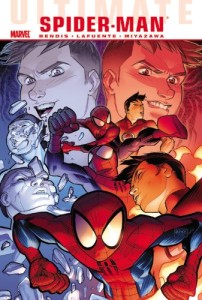 One of Peter Parker’s neighbours develops mutant powers of teleportation. But it turns out that his was chosen to have these powers for a very specific purpose. Meanwhile, the Chamelion twins are up to no good. They have captured J. Jonah Jameson and have been impersonating him for a while now. 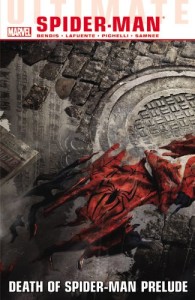 Kitty Pride gets teased in the cafeteria and uses her mutant powers to just let the thrown food phase through her. Mary Jane gets the incident on video and wants to use it to show how unfair people are being towards mutants. Meanwhile, Spider-Man gets captured by the Chameleon twins. This is bad news for the entire city. 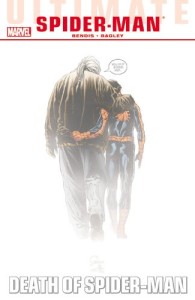 S.H.I.E.L.D. decides that Peter Parker needs training to continue fighting crime. Iron-Man tries to give him a few lessons, as does Captain America. But when The Ultimates are called to avert a huge disaster, The Green Goblin capitalizes on that very moment to bring about an end to his foe.

It was very sad to see Peter Parker die in front of his family and friends. He gave everything he had to protect them. And it was a fitting end for the series.

I know that I read these Spider-Man comics out of order. I should have read this before the Miles Morales story line. But it was good either way.

My List of 2016 Reads – with links to every title I read this year.