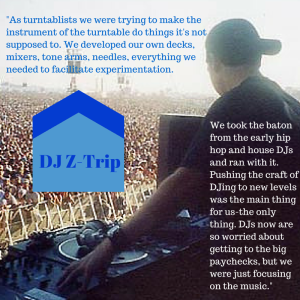 There is a great quotation from Z-Trip that illustrates just how inventive the early disc jockeys were.

“As turntablists we were trying to make the instrument of the turntable do things it’s not supposed to. We developed our own decks, mixers, tone arms, needles, everything we needed to facilitate experimentation. We took the baton from the early hip hop and house DJs and ran with it. Pushing the craft of DJing to new levels was the main thing for us–the only thing. DJs now are so worried about getting to the big paychecks, but we were just focusing on the music.”

Deejaying can get quite technical. There are all sorts of terms, gear, buttons, knobs, and effects that can be used to help create vibes, moods, and nice transitions between records. Here is one of them . . .

“The fader slope determines the speed with which the crossfader opens the sound with respect to a given turntable. When mixing and blending, the traditional fader slope allows for a gradual blend as the crossfader moves from left to right or vice versa (the option on the left) However, when scracthing, most DJs prefer a fader slope that allows them to instantaneously open or close the sound of a given turntable (the option on the right.)”

A good selection of music can not just entertain a crowd, but also tell a story in itself.

Tom Humphries explains, “I’d play a female vocal track, a male vocal track, and then an instrumental. That way they’d get one story from a female perspective, another from a male, and have time to digest those, before I went into the next story. That’s what DJing is–storytelling through music.”

As Long as it Sounds Good

It doesn’t even matter what genre a record is. A good DJ can make it sound good in a mixset or routine.

“When Kool Herc took these principles to New York in the early ’70s there was no hip hop music as we know it today. Herc and the other New York DJs played whatever records they could find from the history vaults of rock, soul, funk, jazz, and current disco and punk combined them in the type of eclectic sets we now call mash-ups. “The records we played weren’t Top 40, they weren’t on the radio,” says Grandmaster Caz, Herc’s peer. ‘We were reaching back into the past to find beats and a special something in old classics and hard to find tracks.'”

You Can Pick From All Genres

“Most of us have a particular music style we identify with. For some, it could be tied to where we grew up, or what our parents listened to. But the pioneering hip hop and house DJs played music from all genres. ‘When I was growing up there was none of this genre obsession you find now in the music industry,’ says Jazzy Jeff. ‘Hip hop DJs played rock, soul, funk; anything and everything with a good beat and a powerful rhythm that people could vibe to. . . I’m trying to get people back to viewing music and music, regardless of genre. I won’t be pressured to play just certain styles or the hottest new tracks. I’m the DJ and I control the music.'”

This is something that doesn’t seem to happen often these days. We have hip-hop DJs that only play golden-age rap, EDM Djs that only play dance music, and Country DJs who only spin music in that genre. A good DJ can use records from virtually any genre and still rock a good show.

Necessity is the Mother of Invention

DJs invented a lot of the recording techniques that are used in professional studios today, but they also invented little things as well.

“Back in the day, when pioneering hip hop DJs were honing their craft, there was a problem with the techniques of cutting, scratching, and backspinning–the turntable platter gripped the vinyl too tightly. “I realized that there had to be a buffer between the metal platter and the vinyl so I could move records back and forth,” says Grandmaster Flash. ‘I bought a piece of felt, cut it into a circle that fit onto the platter, and then sprinkled starch all over it. Then I turned my iron up high and ironed it until it became a hard wafer, I put that between the platter and the record and it did the job.’ While no longer starch-based, the slipmat Flash invented is now used by the majority of DJs on the planet.”

The quotations in today’s post all come from this great book. I highly recommend it for any DJ, beginner or veteran. 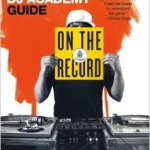 Hip-Hop History Month is Every Month

George Stroumboulopoulos on the Red Carpet