Doctor Who – After Life

This was the first comic book story for the 11th Doctor as played by Matt Smith in the television series. This was a one-off story that didn’t tie in to the series at all. I am glad that further series brought in Amy Pond and Rory Williams. They are, quite possibly, my favourite TARDIS team of all time. But, I always enjoy a good Doctor Who story and this book didn’t disappoint.

This book does something that would’ve been hard to pull off on television. It uses the medium of comics to great effect by having huge, larger than life, colourful creatures. There is also a great deal of humour in the story. It was interesting to see a creature that feeds on negative emotions seeking out the House of Commons. I appreciated the joke. 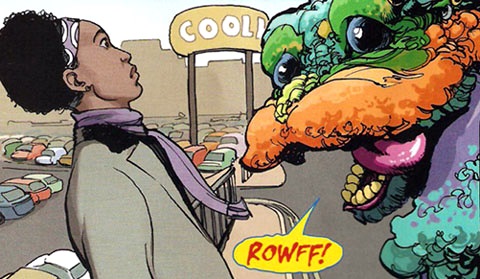 The Doctor was too busy chasing the creature and saving the day to chase down something else strange that he saw. It appeared as if another Time Lord was watching him.

I haven’t read the whole series of this Doctor’s adventures in the comics, so I am not sure how the Time Lords play a role in how the story develops. I will have to find more books like this one at the library. That is where I get most of my comics to read these days.

Common Wants Love to Have the Last Word

Flashpoint – One Moment Changes Everything

On the Hunt for What’s Cool