They say a picture is worth a thousand words.

I don’t expect my Grade 3 students to write a thousand words but I do want to see them writing. Perhaps with a little encouragement, they will write longer and more detailed compositions.
This is one of the picture prompts I have used in my classroom this year. 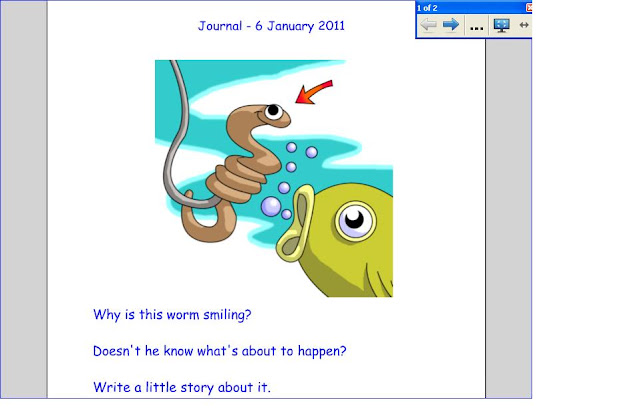 The picture shows a worm on a hook. He seems to be completely oblivious as to the imminent danger he is in.
It’s a cute picture that I hoped would inspire my students to write something creative.

Here is what one of my students wrote,

The worm is smiling because the fish is nice.

The fish is going to help the worm.

One day there was a man that needed a worm. He looked here and there and finally found this worm. The man then went fishing.

A fish tried to eat the worm but the other fish helped him escape. The worm was helped out of the water to safety.

As you can see, my student thought he had to answer the two questions I posed before he began writing his story. I only wrote those questions to give my students something to think about. I wanted them to come up with something creative and this student did just that.

He didn’t write something about a clueless worm. He played with stereotypes here and turned the fish into a good guy and not the natural enemy as was suggested in the picture. That is very creative.

I started a Tumblr a while back because I wanted to collect images I could use for my morning writing program. My Tumblr has turned into much more than a simple image archive for my classroom however. I post images there that might not be completely appropriate for the classroom.

I have now started a second Tumblr now called Get Writing that is completely dedicated to Picture Prompts. So visit Get Writing and to find some great images that will inspire your students to Get Writing!

Where Are The Desks?

Teaching Tip Tuesday – What a Classroom Teacher Expects from a Supply