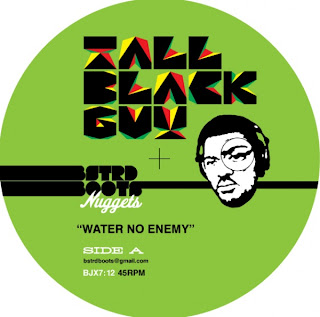 Let’s continue the interview I did with music producer, Tall Black Guy. If you missed Part 1 of the transcript, you can go back and read it, you can stream the interview with the player below, or download the MP3 of it to listen to whenever you like. You could also keep reading. Whatever method you choose, thanks for joining us.

Chase: “We are lucky enough to have Tall Black Guy on our phone lines right now. Thanks for spinning some nice tunes for us for the past hour!”

Tall Black Guy: “Thank you for reaching out to me to do the mix for your podcast. I really appreciate it.”

We’d originally planned to have you on the first episode after we redesigned the site, had a few scheduling difficulties, but we finally got you on the show. The cool thing about The Word is Bond is that we keep a partnership with DOPEfm so I get to do things for both platforms. I’m on the Internet and I’m on the radio for both of those different things.”

Chase: “You have quite an extensive body of work. People can go to your bandcamp page and see a lot of the things that you are able to do. One of those things is, I think the best way to describe it is, a sample flip. That’s where you take a song that it pretty well known and use the same sample and flip it so that it is different, but it still sounds familiar. How do you go about doing that?”

Tall Black Guy: “I used to do a lot of beat battles. I can’t even remember the last time I did one, maybe 2008. I did beat battles for a little bit of time. I won a few of them, and I got a sense of what the crowd actually liked. If you use a familiar sample and flip it differently, that would really get the reaction of the crowd.

Even before beat battles, I was taking different samples that I liked, and I never wanted to loop anything. I always wanted to chop it. As a child, I would chop up something that was very, very popular and just try to put my own little twist on it. That’s basically where it came from, me doing beat battles and kind of gauging what the crowd wants. Using something familiar to try and persuade them to like my beats.”

Chase: “That’s cool. You have vinyl releases now, don’t you?”

Tall Black Guy: “Yeah. I have a few of them. I’d say over the last year or so, just like little small 7-inch, Dance Forever that’s off of First World Records. That’s the A-side, and the B-side is Return of the Here and Now, Water No Enemy, that’s on the Bastard Jazz label. There was another tune called Lost and Gone.

There is so much music getting released at one time, a lot of times people will miss everything if you put a whole project out there. So, I try to keep it kind of limited. I think 7-inches are the way to go. As far as releasing those smaller things, and then maybe drop something big and then go back to those smaller releases.”

Chase: “The way we consume music has changed these days. With the Internet, some times you just need one song and people will gravitate towards it and grab onto it instead of having a whole album. You can do a lot with a short EP or a single. It’s real nice to see, the real hip-hop purists are still putting out some vinyl and it’s not just all digital.”

Chase: “Do you ever have a song in your head? Like an idea for a horn, or a bassline, or something like that, and you can kind of hear it before you sit down and start to work?”

Tall Black Guy: “Some times I can hear something in my head. A lot of times when I try to come up with a track, I’ll start off with some kind of sample just to give me an idea or push the idea forward. From there, I can start hearing different things.

I might find a sample and chop the sample, but then I might replay the chop on the piano. I know a lot of my music, and I know what different things sound in key, so a lot of times I can go to a different sample source and grab a guitar sample from Kenny Garret or something like that and then put it in key with this James Brown sample, and then go grab something from Bob James and so on and so forth. That’s how I hear things. Once I start the track, I can hear different samples that might be in key with that, and then I play over it.”

Chase: “That’s awesome. It’s like a building process. You start with one thing and then you know you want to add this. It’s like playing with Lego some times. You’re playing with sounds and putting it together, and one thing leads to another.”

Chase: “I think a lot of times, we get stuck on the emcees and we don’t really talk enough to the producers and what they actually do and how important they are.

You have quite the body of work and you’ve worked with quite a lot of artists, but if there was someone out there who liked Tall Black Guy beats and wondered, ‘Can he produce for me?’ Do you sell your stuff if anyone wanted to reach out?”

Tall Black Guy: “All the time. Selling my music is my income. I’m not strictly living off it per se, but I do sell my music. I have criteria though. You gotta have a positive message, you can’t curse, no profanity, you can’t say God’s name in vein, you gotta be real straight edge, if my mother can’t listen to it, we might have to do something different, just because music is a very,. very powerful thing. I don’t want to be one of those guys where I contributed to somebody doing something bad to themselves when they’ve listened to my music.

Chase: “That’s amazing. I’m an elementary school teacher and I can play rap songs that are totally clean to students and they’ll go, ‘Oh, it just swore!’ and I’ll say, ‘No, it didn’t.’ I think part of the reason they think that is that there is this assumption from the general population that rap just has to swear. And then there are artists, such as yourself, that say you don’t have to.

You can actually have a good song without any swear words. It’s not a prerequisite to hip that you have to swear. I wish more people knew that.”

Tall Black Guy: “They probably do, but I guess, it’s whatever sells. I know, for me personally, I really see it as distasteful. I chose for myself not to do that.”

Chase: “Do you listen to rap that swears though?”

Tall Black Guy: “I really don’t even listen to hip-hop anymore. I listen to more R&B, jazz, and other people’s beats. That’s what I do now. I’ve listening to R&B pretty much my whole life, but my collection now is almost all R&B and jazz and world music. I don’t even like hip-hop anymore, personally, because nobody is really saying anything intelligent. I don’t enjoy hip-hop like that anymore.”

Chase: “That’s a shame. These days you have to go deeper and deeper to find the good stuff and it’s totally in the underground. But even being a music producer, you don’t want to be pigeon-holed into one genre anyway. You want to listen to different types of music, like that’s actually part of doing your homework, I’d assume.”

Chase: “We covered a lot of topics today and got a great music mix from you. So, if people wanted to get in touch with you or find out more about your music, how can they go about doing that?”

Chase: “Just an interesting story, I was telling my students I was interviewing Tall Black Guy and they said, ‘That’s racist!’ They didn’t realize that was your name, they thought I was just calling you a tall black guy. So are you exceptionally tall?”

Chase: “The name definitely fits then. Well, it has been a pleasure having you on the program, on the radio show, and in the podcast. So, thanks for blessing us with some music and finding the time to sit down and talk with us. It was really cool to hear how you do your beats and how you started.”

Tall Black Guy: “Thank you for having me on your show. I really appreciate it.”

That concludes the interview. Please download the podcast for free or stream it with the player below. And don’t forget to subscribe to the podcast so you don’t miss any of the weekly episodes focusing on the best in hip-hop.

Thanks for tuning in. I’ll see you here on the blog again tomorrow, on your radio Saturday night, and on the podcast again on Monday.

Taking it Back with Mastermind on Word is Bond Rap Radio