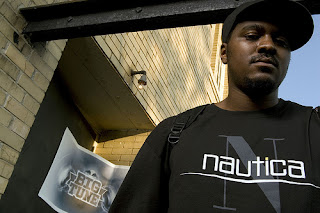 A few months back I had the chance to interview music producer, Tall Black Guy. We talked about music production, sampling, swearing in hip-hop, and much, much more.

You can read the transcript of the interview, listen to it with the player at the bottom of the post, or you can download the show for free to listen to whenever you like.

We talk for about fifteen minutes, then Tall Black Guy spins some great tracks for an hour, and we finish off the show with another fifteen-minute interview.

So without further ado, here is the transcript of the radio show / podcast.

Chase: “All right everybody, this is Chase March and we have a special guest on our phone lines. We have Tall Black Guy. There’s a website I frequent called Bama Love Soul. They call you ‘Everyone’s Favourite Producer.’”

Tall Black Guy: “I guess. I don’t really see it like that. I just try to make music that I believe in, which is, always trying to be positive with the message.”

Chase: “That’s cool. They put out a mixtape of some of your earlier work and they called it Tall Black Guy – The Lost Tapes and it was actually mixed by DJ Radhu. It’s a nice project. There’s a track of their from the 80s Babies ‘Technology.’ I really like that track.

There is a hilarious line in there, ‘the sun rises in the east and it sets in the west. That ‘s useless information ‘cause I got a GPS.’ That’s hilarious!

Tall Black Guy: “Dee Jackson, he’s like my best friend. I’ve known him for like 15 or 16 years. He’s the one that writes the lyrics. I was the one, that more or less, came up with the beat. But how we came about it was, he had this crazy idea about technology and he gave me the idea for the beat.

Basically, he told me what the idea was and I built the beat around that. I didn’t know he was gonna come with that effect as far as having the song just describing all different types of technology. That’s one of my favourite songs.”

Chase: “There’s another lyric in there I like. He says, ‘When I take a walk, man, I don’t need a walkman.’ I think the same thing. I am a trail runner and I love going for runs but I never put headphones on. And it always amazes me why people need that. When you are out and about, I don’t think you always need to have music with you. That might sound weird being that I’m a DJ, but I don’t bring music with me everywhere anymore.”

Tall Black Guy: “I don’t really either. More or less, if I am at work and I think about it, I might bring an iPod or something.”

Chase: “Yeah, I think there is something to be said about being disconnected. Even when I go out, I don’t always want to have my cell phone or be connected all the time.”

Tall Black Guy: “Understandable. Sometimes you need a break from it.”

Chase: “I think so, but technology is a great thing. There you are, across the pond, and we’re able to still do an interview. It’s pretty amazing.”

Tall Black Guy: “That’s the great thing about Skype. Skype invented something that is really cool because you can talk to your friends and see their face at the same time, and it’s free.”

Chase: “Yeah, ya gotta like that. I’m using a really old, out-dated computer. I don’t have a webcam, so we aren’t seeing each other, but this is radio so we don’t need it.”

Chase: “We are big fans of your work over at The Word is Bond and at DOPEfm, playing your stuff all the time. You are actually going to be throwing down a mixset for us in a few minutes.”

Tall Black Guy: “Yeah, just trying to throw some more good music out there, ya know? That’s the main thing. My goal is to always try to be consistent.”

Chase: “Can you tell us how you got started in hip-hop and music production?”

Tall Black Guy: “Basically, I grew up around music because of my parents. I guess that is every producer or every musician’s story. I didn’t even start making music till I was like 20. I used to beatbox when I was a kid and then one day, when I was like 20, I was like, ‘I just want to make music.’

At the time, this was around 2000, 2001, somewhere around there. I didn’t have enough money to buy an MPC or anything like that, so I invested in, at the time, it used to be called Sonic Foundry: Acid 2.0. I spent like $60 on that program. I tried it out for a little bit and then kind of gave up after a month. I could never figure out how to sequence the drums. That was always my problem, so I quit for like a month.

I went back into it, and from there, it was just a lot of practise. When I first started, I was putting in anywhere from like 14 to 18 hours in a day. I just kept practising, practising, ya know? Trying to figure out different samples and studying some of my favourite hip-hop producers.

I was sampling for a long time, up until about three years ago. I sampled up until about 2009 and then I wanted to start playing. So, I taught myself how to play keyboard. Sampling is cool but I think sampling can only take you so far if you are actually trying to make some big moves, as far as like, getting into music licensing, movies, and things like that.

Chase: “That’s a good message. In this day and age, just because it is so easy to release things, a lot of people think, ‘Hey, look, I just made a beat. Let throw it up for the whole world to see.’ But there is something to be said about paying your dues and actually working to perfect your craft.

Tall Black Guy: “I could never afford an MPC, so that was my only other option at the time, to invest in something to make my music. I tried all the other different software at the time and I really could understand any of them. Acid seemed to be the best one I could gravitate towards to. I pretty much mastered that program. That’s all I use now. Sony Acid: Pro Effects, along with a MIDI controller. That’s basically it.”

Chase: “I got into production in the late 1990s and I got some really old gear. I had an Akai Sampling Keyboard and I had an Atari computer running Cubase. That’s what I was using. I mean, you could use anything as long as you can figure out how to make it work and get it singing, you know what I mean?”

Tall Black Guy: “I never knock anybody. If they know how to make a beat on the table, as long as it sounds good, that’s all that really matters.”

Chase: “For sure. Well, I think we should stop talking and get some music going, right about now. You are going to lay down some tunes for us for about an hour, and then we’ll come back and talk to you some more. I’m looking forward to what you are spinning”

You can download the entire podcast or stream it with the player below. Don’t forget to subscribe to The Word is Bond Podcast as we deliver you the best in hip-hop, artist interviews, guest DJ mixsets, hip-hop history spotlights, and much, much more.

Come back tomorrow to read the conclusion of this transcript.

Record Collecting for EVERYONE!