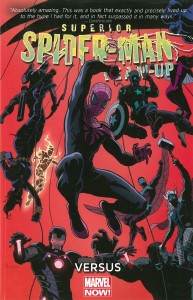 Superior Spider-Man Team Up: Volume 1 – Versus

No one in the Marvel Universe realizes that Doc Ock has taken over Peter Parker’s life. Not even when he battles them all. There are some pretty good fights here and an interesting way to kick off the new on-going team-up series.

It looks like, perhaps, Doc Ock is back to his evil ways. But ever since he rededicated himself to be an even better Spider-Man than Parker ever was, he has been fighting crime in his own way. And of course, this time it is no different. 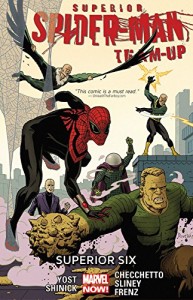 The Superior Spider-Man is on probation with The Avengers because of his peculiar actions as of late. He decides that he needs his own team and uses technology to control the Sinister Six. He uses them like puppets to form his new hero team, The Superior Six. But not everything goes according to plan.

Also, in this collection is a team-up with my favourite super-hero, Daredevil. he knows that something is off with Peter Parker as well. He doesn’t bring it full circle to discover the true secret, however.

So far, this title has been a great addition to the on-going Superior Spider-Man title. It’s an amazing series and I highly recommend it.

In fact, I would love to see the new movie franchise go down this route in the next few movies. I couldn’t help but thinking that as I watched The Amazing Spider-Man 2. It feels like it would be a natural progression.

Dart Adams Drops Knowledge in The Book of Dart

On the Hunt for What’s Cool