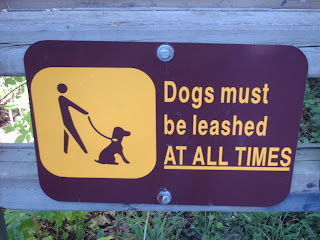 I must apologize for running this post now. My girlfriend and I broke up last week. This post had been sitting in my draft folder though, and it is a story that really should be told.

My girlfriend and I like to go hiking. We seek out new trails to explore and head back to our favourite spots often. Last month, we returned to Warbler Woods. We’d only walked there once before but I’ve gone trail running there about three times. It really is a beautiful spot to visit.

The trail takes about twenty minutes to hike. During our walk, we only came across one other group of hikers. In fact, every time, I’ve been to this trail, it has been only lightly travelled.

As we got back to the front gate of the trail, there was a dog there that was completely unattended. My girlfriend is deathly afraid of dogs. I saw the dog from about two-hundred meters away and warned her about it. The owner was still nowhere in sight.

As we approached the trailhead, it was clear to me that the dog was friendly even though it did not appear to have an owner. The dog came and circled around us nevertheless. My girlfriend was legitimately scared.

We saw the owner, still in the parking lot, and nowhere near the start of the trail. My girlfriend yelled at her to come and leash her dog. The owner didn’t even have a leash with her. She didn’t call her dog either. She really did nothing to alleviate the fear that my girlfriend was so obviously feeling.

The owner had the nerve to then berate us. She said, “You really shouldn’t come here if you are afraid of dogs. No one leashes their dog here.”

I can’t believe she just deflected all blame like that. She didn’t have any control of her dog. She let him wander around unattended for at least four minutes and then she tells us it is our fault.

We have laws in this country that say your dog needs to be on a leash when you are out in public. You can’t simply leave your dog off of the leash and expect people to be okay with it.

Some people are legitimately afraid of dogs. Some people would like to be able to go for a trail run and not have to worry about having to stop when they see a dog because they don’t know how it will react. I hate that my run often get interrupted by careless and inconsiderate dog owners. I usually just go with the flow when these things happen.

I should have told this particular dog owner that we shouldn’t have to worry about her dog when we go for a relaxing walk along the trail. I should have told her that if she wanted to have her dog off of the leash, there are several Off-Leash Dog Parks in London that she could have gone to instead of this nature trail.

I really don’t like how this dog owner took no responsibility, reflected the blame, and basically told my girlfriend that no one should be afraid of dogs. Maybe I should have done more about this at the time. I just didn’t know what to say.

Where are the Parents?

Take it Down or Cover it Up – Please!