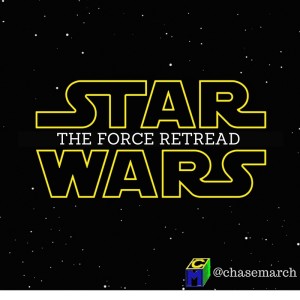 I avoided pretty much all of the hype leading up to Star Wars VII: The Force Awakens because I wanted to go in to it with an open mind. This was one film that I was hoping would blow me out of the water and replenish the franchise.

But as I watched the film, I got more and more disillusioned with it as time marched on.

Warning – Spoiler Alert: Read no further if you haven’t yet see the film.

One of the first scenes in the movie was set on a desert planet. That’s a very familiar trope in Star Wars. But then again so is a droid carrying a secret message in it. There was even an Obi Wan Kenobi type character in the opening sequence. He looked almost exactly the same as we remembered him. Of course, it wasn’t him or any relation. It was just an image we’d already seen before.

Maybe that was by design. After-all, the film-makers wanted to reestablish the galaxy for a new audience and for one intimately familiar with Star Wars. So I let that some of that go.

Next, we are introduced to a female character through this very droid. It was pretty much exactly what happened to Luke Skywalker in the original Star Wars film. And it plays out nearly beat by beat. She discovers that she is strong in the force and starts her journey to become a hero, at first reluctantly.

This is when the film started to get ridiculous. I wanted a new story, set in the Star Wars universe with a smart plot. That wasn’t too much to ask for, was it?

Maybe it was. I swear the film-makers thought, “Hmmm, what are the parts of the original movies that fans really connected with?

They just piece-worked all of that stuff in. The film looked great, however. The visual aesthetic was bang-on for what we would expect, but the story?

The story was exactly the same as Episode IV – A New Hope. If this were a reboot, I could have forgiven that. But this was Episode VII – The Force Awakens and I expected something novel.

Instead, we get a new and more powerful Death-Star, now called a Starkiller. And guess what, it has one small vulnerability that can be exploited by two teams. Even Han Solo knew the film was getting ridiculous at this point. He says, “We can always blow those up?”

And so they send a team to the planet to disable the shields and a fleet of ships to exploit that weakness in the Starkiller and blow it up. We saw this already in Return of the Jedi and even before that, minus the shields in A New Hope.

Oh, and we get a scene where Han Solo confronts the bad guy, on that base. Just like Obi Wan did in the original, and with the same consequence.

And that’s the main story. The subplot is that everyone has been looking for Luke Skywalker for years. The droid had a map that would lead directly to him. Why such a map would exist is beyond me and the weakest plot point of the entire film.

This film was a lazily written reboot and not a true sequel at all. We deserved a lot more for this beloved franchise. But I guess I shouldn’t have expected anything smart from this film. J.J. Abrams only seems capable of redoing past stories. That’s exactly what he did with the last Star Trek movie.

I heard a critic on the radio who called him, “The brilliantly unoriginal J.J. Abrams” and I couldn’t agree more.

Where are the Critics?

I had quite the heated debate about this on Facebook. So many of my friends loved the film and didn’t see these as problems at all.

David Roberts had some great things to say in his article, “Critics are going too easy on Star Wars VII: The Force Awakens”

There are so many things wrong with this film. And it looks like they are set to copy even more elements of the original trilogy in Part VIII. I can possibly forgive that, if the story comes correct next time.