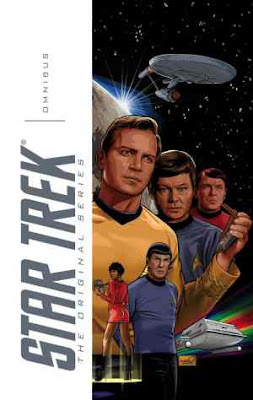 I am a huge Star Trek fan. I have been ever since my dad introduced me to it when I was a kid. There was just something about the show that spoke to me.

There really is a magical quality to Star Trek, which is how it has remained alive for close to 50 years now.

I must say that I have always preferred the original series over any of the other incarnations of the show. There was just something about ship itself and its bridge crew. They had a natural chemistry that made you look forward to each and every new episode.

Of course, I wasn’t around for the original airing of this remarkable series. But I was there for the reruns on the weekend. My dad and I would sit down and watch those shows. Me, for the first time, my dad for the twentieth. And somehow, it never got old. It still hasn’t.

As a teenager, I loved the films. They couldn’t come out fast enough for me. I needed new Star Trek adventures and turned towards novels and comic books for my fix.

I have read quite a few Star Trek adventures over the last twenty years and I must say that I am really enjoying this new series from IDW that effectively tells the fourth year of the Enterprise’s five year mission.

As many of you know, Star Trek only survived for three seasons in its original run. That leaves the writers with two seasons of Star Trek to tell. Plus, knowing how the movies advanced the storyline of the Star Trek Universe, how further television shows such as Star Trek: The Next Generation, Deep Space 9, Voyager, and Enterprise all contributed to Star Trek lore, gives the writers of this comic book a pretty good blueprint for where the story may have gone had Star Trek had a fourth season on television.

I love how this comic book series has focused on the cold war between the Federation and the Romulans. It has also fleshed out the story of the Klingon Empire and given us sequels to some of the great episodes from Seasons 2 and 3.

If you are a fan of the original series, you will love what is being done with the comics right now. That is why I am adding it to my Recommended Reads section of this blog.

So go out there and explore strange new worlds, seek out new life and new civilizations, and boldy go where no one has gone before.

The Death of Ultimate Spider-Man