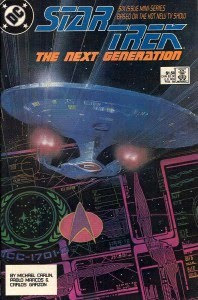 This comic book was written and produced before the brand new television series Star Trek: The Next Generation hit the airwaves in 1987.

The creators of this comic had to write and produce the book before ever having seen an episode of the show. That’s what makes this an interesting read all these many years later.

I hadn’t really thought about it much before but I now see something that the television series didn’t do. Quite frankly, it didn’t live up to its potential in bringing us a new Star Trek experience.

Firstly, the new Enterprise NCC 1701-D was a huge ship that carried over 1000 crew members and civilians. The ship was purposely designed so that the crew members could live with their families on the ship. So why then was this not a reality in the television series?

I can understand that the captain didn’t have a family on board. A major trope of the original series was that Captain Kirk was married to his ship. Captain Picard fits in with that trend perfectly, so much so that he doesn’t even like children. That was a cool aspect to his character, especially considering that his ship is full of children. But where were they?

Why didn’t any of the bridge crew have families on board? In fact, none of the regular cast members had any family whatsoever. Wouldn’t these officers have been assigned to a smaller ship? The only regular crew member with a family was a single mother, Dr. Crusher.

In this comic, we actually see a married couple bickering with each other. These two panels show the couple arguing as they rush to get to the bridge on time for their duty. 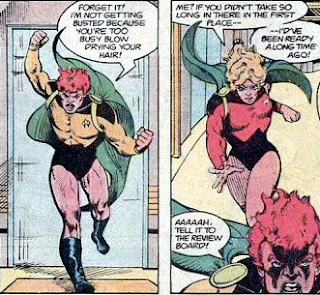 They were called The Bickleys and I actually found them quite annoying in this comic book series. They weren’t very professional as they carried their argument onto the bridge with them. They fought while they were on duty several times in this mini-series as well. But it was realistic to have a family and a young married couple actively serving on the bridge crew.

To be fair, there were some stories on the TV show that did show families and school children but they were few and far between. This show felt much like the old Star Trek series. All of the main characters focused most of their attention to their duties and to the ship.

Star Trek: The Next Generation was supposed to bring us a new experience where we saw civilians and families interacting with the commissioned officers and non-commissioned crew members but it failed to live up to this potential.

That being said, I enjoyed the TV series. I know that it took some time to grow into its own. It borrowed and stole a lot from the original series before it finally found its own identity. It just would have been interesting to see more family life aboard the ship though.