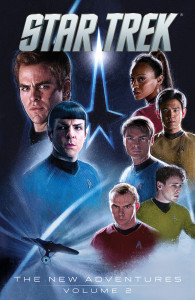 The first volume of this graphic novel series didn’t sit right with me. I was pretty harsh in my review of it. In fact, I recommended skipping the title altogether. It was advice that even I didn’t take. I saw the second volume at the library and decided to give it a try. I am glad that I did.

The first story in the collection revolves around a minor character from the first rebooted movie, Hendorff. It sounds like a weird start to the collection, but it works. I like how much he takes pride in wearing the red shirt uniform for the Enterprise. A lot of us in the fandom know what that might mean, but to see it taken so seriously in this story and have it not be a joke is a really nice touch.

We also get a one-off story from Scott’s associate, Keenser. We see the challenges he has serving on the starship due to his diminished stature. It’s the only time in the Star Trek universe that I am aware of where this issue has been tackled.

Scotty, Bones, and Uhura each get their own one-issue story in this collection, but for some reason Sulu and Chekov have to share one.

We get a Mirror Mirror story in this volume that isn’t simply a retelling of the original television series episode. In this one, Kirk is the bad guy and Spock is the reasonable one. We even get old Spock in the story, which was pretty cool.

I also really like the reinterpretation of the classic episode “Amok Time.” This is the one where Spock goes through a mating cycle that requires him to return to Vulcan. Of course, in the first movie, his home planet had been destroyed, making this impossible. The Enterprise diverts to New Vulcan only to find that the Pon Farr ritual is not effective for many of the Vulcans. It seems that the ritual was tied to the solar system and planet of the original Vulcan. It looks as though Spock might be lost to insanity, along with many others.

I can’t believe how effective this second volume of the comic series was. It seems that writers and artists have grown into knowing exactly what this universe is about. They are respecting the source material while bringing something new to it. It feels like Star Trek and I will be happy to read more.