Star Trek is a great franchise. It’s what originally got me started in collecting comics. I needed more Star Trek stories of the original crew. I guess we all do. 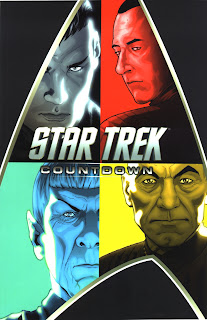 This graphic novels serves as a prequel to the reboot of the movie franchise. There were a lot of things wrong with that film. A lot. This comic did a better job of bridging the old trek with the new. I wish more of this content had made it into the film.

The story here takes place several years after Star Trek: Nemesis. Captain Picard is now an ambassador, Geordi LaForge has left Starfleet and now designs and builds commercial spacecraft. In fact, he designed the ship that the older Spock flies in the film. Nice detail there!

One thing that has always bugged me about the Star Trek spin-offs and further adventures is how the writers often mine classic Trek for story ideas.

In the last Star Trek film, prior to this reboot, Data sacrificed himself to save the ship. It was pretty obvious that the writers of the film had left a way for him to return in the next film though. In this sense,  the writers were pretty much copying Star Trek II: The Wrath of Khan.

Data was the Spock character for the new series. Some people thought he was a cold, emotionless robot. What better way to recreate that trope than an actual robot (or android in this series)

I was expected one more Next Generation film, which would have been the eleventh in chronological order. I was expecting Data to come back to life in it, just like Spock has done in Star Trek III. 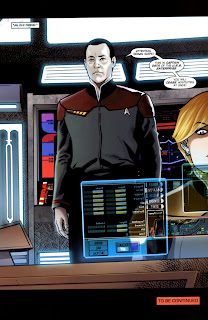 That is why it was cool to see Captain Data commanding The Enterprise.

I also like the tension that surrounded Ambassador Spock in this story. He is working and living on Romulus with the goal of reuniting and bringing ultimate peace between the Romulans and the Vulcans. It made sense for his character. He’d already done the same with the Klingons and The Federation.

Worf even has a role in this comic.

I like what they did with this book. I wish the movie could have done the same thing. They bridged the history of the last Star Trek film, tying in Next Generation characters, and then went back into the past to start it all from the beginning. It’s poetic and it works. 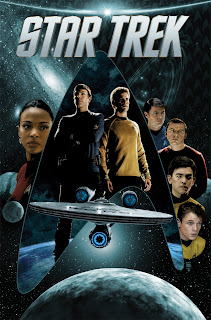 The cover of this book has a reviewer’s quote that reads, “The new Star Trek comic literally combines the best of the old series and the new movie.”

I must admit, that intrigued me.

Until I read it.

I am so tired of lazy Star Trek writers. Why must they constantly recycle old material?

This series retells two episodes of the first season of the original series. There is nothing creative about it. Nothing.

The first story retells “Where No Man Has Gone Before” and there are a few rumors floating around that the second movie may also do the same thing. The comic did a good job of retelling this iconic story while setting it in the new timeline. It just didn’t offer me anything new.

The second story was a complete let down. The original Galileo Seven was a great episode. It dealt with Spock having to take command of a small shuttle crew. The rest of the crew didn’t understand or agree with his decisions. And it was a life or death situation. The stakes were that high.

The comic retelling rushes through the story and doesn’t hit any of the emotional arcs it should have. The resolution was even changed. Instead of the small crew coming together and solving their own problems, Uhura swooshes in and saves the day.

I was so disappointed with this story. This series is just a bad idea all around.

I’m willing to accept the new timeline. I’m eager to see new Star Trek adventures both on film and in the comics. It just can’t be done this way. It’s lazy writing. It doesn’t honour the Original Series at all.

Star Trek needs to stop chasing the past.

Star Trek needs to stop mining old material for new stories. It needs to live in the new timeline and reality created for the reboot. But it has to do so in a believable way with strong writing and great stories. That’s what I have always loved about Star Trek and that’s what I hope to see in the new film.

My Name is Memory