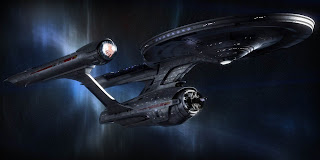 I remember the excitement and energy back in 1991 surrounding the twenty-fifth anniversary of Star Trek. I was really excited about it.

Back then, The Original Series was on the air pretty much every day and new movies were coming out regularly. Star Trek: The Next Generation had also really come into its own. Star Trek was a global phenomenon that seemed unstoppable.

I remember going to the Skydome (now the Roger’s Centre) in Toronto to watch the series finale of ST:TNG. It was amazing to see a crowd sharing a television series together like it was a football game. It was history in the making and it was cool to be a part of it.

Star Trek: Voyager kept up the legacy until 2001 after that. The new series Enterprise then took over the reigns but wasn’t nearly as strong and faded from the airwaves in 2005. We were facing, for the first time, a drought in new Star Trek adventures either on television or on the movie screens. That hadn’t happened since 1987.

Fortunately, we were teased with announcements of a prequel film, which would have William Shatner and Leonard Nimoy reminiscing on their old days before they served together on the Enterprise. New characters would be playing their younger selves. I am such a Star Trek purist that I couldn’t really see anyone else playing these iconic characters but as long as Nimoy and Shatner were involved, I was willing to give it a chance.

When I found out that the studio had instead decided to do a reboot and recast the entire crew for a new series of movie adventures, I wasn’t sure it would work. I avoided all the press so that I wouldn’t be biased going into the theatre to watch it. I lowered my expectations and really gave them the chance to pull this off.

My first impression was that they actually did it. I enjoyed myself in the theatre and was impressed with how well some of the actors really nailed the characters. Bones was bang on, the mannerisms, the voice, everything.

I understand that the story involved a change in the timestream that wouldn’t be corrected during the course of the film. This gave the writers and producers the freedom to create a new world with new rules and allowed them to reboot the franchise without having to worry about a lot of the Star Trek lore and loyal Trekkies like me.

For the most part, they succeeded. The film felt like a Star Trek film. They kept the essence of Trek and it was a fun ride.

However, upon a closer look the film falls apart. (Spoiler Alert)

First off, the timeline before the events in the story are way off base. In the original Trek, the Enterprise went out for 11 years under the command of Christopher Pike. Spock actually served under Captain Pike before Captain Kirk. Yet, in the movie, the ship is still being built and Pike is assembling his crew.

This didn’t bother me too much until I saw Chekov. He was the youngest member of the original crew. According to what we know of Star Trek lore he would have been like nine years old at this time. It really didn’t make sense to have the Enterprise still being constructed if they wanted to introduce all the characters we love from the original series. But whatever, I’ll give them that, I said to myself as I watched.

If you can get past those inconsistencies, you could enjoy the story. That’s what I had hoped for anyway. However, the story was full of holes and lazily written.

Hole # 1 – Kirk gets ejected from the ship and just happens to land on the planet the older Spock was marooned on. This seems way too coincidental. Spock fights off huge creatures that were trying to kill his old friend. They take refuge in a cave and Spock reveals himself to the younger Kirk.

Hole # 2 – Spock was supposedly ‘marooned’ on this planet so he could witness the destruction of his home planet of Vulcan. In fact, he does witness it shortly after Kirk arrives. But the hole in the story occurs directly after that as Spock takes Kirk to an outpost that is only 14 kilometers away. Here they meet a younger Scotty and Spock instructs him on how to modify the transport beam so that Kirk can get back aboard the Enterprise.

Spock could have beamed off that planet whenever he wanted to, wherever he wanted, but he just chose to stay there and watch his planet get destroyed. How does that make any sense?

Hole # 3 – The bad guys in the film are the Romulans and in the Original Series Kirk made contact with them in the middle of their five year mission. Yet at the start of this film, at least 15 years earlier, everyone already knew who the Romulans were.

My Verdict – The New Star Trek movie doesn’t hold up to close scrutiny. The old films do, even Star Trek IV: The Voyage Home, which also deals with time travel, does so in a way that makes sense. This new movie even stole some material from that earlier one, but the other franchises and films have always done that.

In conclusion, I think some Trek is better than no Trek and I have high hopes that they will make a much better sequel. The Original Motion Picture wasn’t that good way back in 1979 but its sequel is one of the best Star Trek films ever. So here’s hoping that the New Star Trek II can recapture that magic.

The Best TV Shows Of All-Time (According to Me)