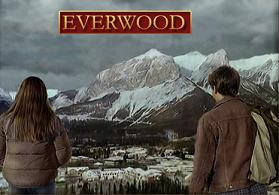 At the end of the last school year I decided to give myself a little treat. It was something I had wanted for a long time. I went online and bought it.

I got the complete series of Everwood on DVD and it was worth every penny.

I absolutely love this show. The network only ever produced the first season for commercial sale. I bought it as soon as it was available and I waited for the second, third, and fourth season to be released. Unfortunately, they never were.

I knew that there were websites that sold complete seasons of television shows that had never been commercially released so I looked into buying it a few years back. It was really expensive so I never bothered.

Last spring, I checked again and the price had come down. I found a website that sold all 98 episodes of this superb series. I immediately bought it.

The DVDs came from Japan or China, I can’t remember which. The discs were screen printed and came in plastic sleeves inside a nicely made up case. It wasn’t as professional or as sharp as the official Season 1 box set I purchased, but at least now I could finally watch the rest of the series again.

I was really excited about watching these again. There were 20 discs in total and I made my way through them. That is until I came to a disc that wouldn’t work. I then went through all of them just to check. I’m glad I did. I found 5 discs that wouldn’t play properly.

I had no problem getting replacement discs sent and was super-excited about having the complete set of episodes.

I remember when I first watched the series finale, I was really impressed with it. The finale was absolutely perfect. Picture perfect television is rare. I loved ever minute of it.

So I have slowly made my way through watching this entire series in order again, every single episode.

I watched the second to last disc on Saturday and planned on watching the final disc with the two hour series finale on it on Sunday.

As I watched the finale with anticipation, it cut out half way through. I tried playing it again but the same thing happened. I tried it on another DVD player but still had no luck. I even put it in the computer. It was no use, the last half of the finale wasn’t there.

I was so pissed off. I had waited for this for so long. I didn’t want to wait any longer. I was sure that the company would send me another replacement disc but I just couldn’t wait that long. So I went online elsewhere and found it as a free download.

Yes! The Internet is the best thing ever.

I watched the finale again and it was just as perfect as I remembered. I will write about it in detail tomorrow. Stay tuned.

This Time of Year I Miss TV Guide

Small Print on the Screen