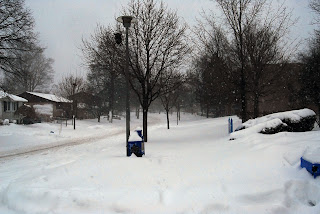 I’ve lived in Canada my entire life. I’m used to heavy winters and I’m used to the craziness that often accompanies the first major dumping of snow each year. However, I have never seen anything like Snowmageddon 2010.

It started off innocently enough Friday night. I woke up the next morning to find a light dusting of snow on the ground, completely unaware of what was to follow.

The snow started back up Sunday afternoon and it continued to fall for the next three days. It hasn’t completely stopped yet. The forecasters are expecting more snow to fall and in total some areas will see 140 cm of the white stuff.

Just to put that in perspective, a typical winter in London sees, on average, 200 cm of snowfall each season. That means we have already seen more than half a winter’s worth of snow, in only four days.

The city has been shut down since Monday. All of the public schools closed, the university and college closed, the public buses were pulled out of service, and people were urged to stay home.

I have kept the car in the parking lot since my little mishap Monday morning. I stayed home and heard a steady stream of sirens from emergency vehicles. I went on Twitter and announced that the outside world could wait. It was important for us to wait out the storm and stay safe.

This really is the most crazy winter storm I have ever experienced. I have never seen three consecutive snow days in my life, either as a student or as a teacher.

I`m hoping that things will be back to normal tomorrow morning and that this weather front will have moved on by then. I`m keeping a close eye on the weather reports and the news. Stay safe people!