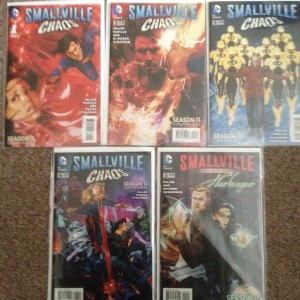 Smallville was a television series that ran for ten seasons and revolved around a young Clark Kent before he became Superman. I own every single season on DVD and really enjoyed watching it.

I had no idea that the story continued in the medium of comics. My brother surprised me with the first 5 issues of Smallville: Chaos since he knew I liked the TV show.

It turns out though, that there are many issues of the comic before this mini-series. I am interested in reading those too since this story characters from the DCU that never appeared on the TV series. I’d like to see how they came to be in the story.

I also like how Watchtower has expanded. It feels like it won’t be long till the have the space station as seen in the Justice League animated series. It really feels like this comic was trying to seamlessly bring to be part of that continuity.

I think I would have gotten more out of this story if I had read the title from the very beginning. That being said, just like the regular Superman title, you can jump in anywhere and still enjoy the story.

The fifth issue of this series was a stand-alone story focusing on Zatanna and Constantine, just to show you how much of a collaborative title this is. The show was moving that way too. I would have loved to have seen Batman and Wonder Woman in it like they have been in this comic book series.