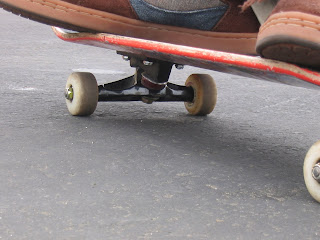 First thing Saturday morning, I grabbed my skateboard and rushed out the door. I was going out a bit late. It was 8:30 a.m. but I knew it would still be early enough to find some deals.

It was the annual community-wide garage sale event. It’s always a great day because there are quite a few households that participate and you can often find some good stuff if you go out early enough.

There was a lot of ground to cover so I probably should have taken the car but I didn’t want to for a few reasons. Number 1, I don’t usually drive if I can walk. It’s better for the environment and it saves me gas money. The second reason was that I probably wouldn’t have gotten out of the car often. I would’ve just tried to see what there was as I drove by and I might have missed some good deals or items.

Some of the people in the neighbourhood thought it was hilarious to see my strolling through on my skateboard. “You can’t carry much with you on that thing, or is that the point?”

Maybe it was the point. I really didn’t have that much money to spend. I was looking for one thing in particular. You never really know what you’ll find at garage sales though so I continued to skate around after I had found it.

I didn’t find anything else worthwhile and was about ready to call it a morning. I’d been zooming around town on my skateboard for just under two hours. So far, it had been a fun hunt and I was enjoying myself. But I was suddenly hit with a bad leg cramp. It hit me suddenly and for no apparent reason. It hurt to walk and it hurt to skate. I had to hobble about a kilometer to get back home. I’d never had anything like that happen to me before either.

I took it easy for the rest of the day but my leg still hurt even hours later. I must have pulled a muscle or something because the pain lingers this evening as well.

I must be getting old. I used to be able to skate for two hours with no problem at all. I still go out skateboarding occasionally but I can’t remember the last time I’ve put that many miles on it all at once.

So that was my adventure for the weekend. What was yours like?

Running Alongside the Ausable River Cut

INTRODUCING. . . Sweethearts of the Galaxy