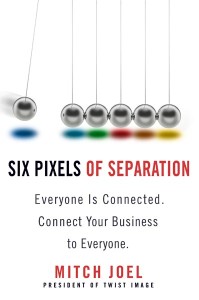 Six Pixels of Separation: Everyone is Connected. Connect Your Business to Everyone by Mitch Joel

In this day and age we are all connected via the power of modern communication devices. Everyone I know has access to the Internet, whether at home, on a mobile phone, or at the public library. And with the proliferation of social media, we are pretty much all connected to one another.

In this book, Mitch Joel plays off of the Six Degrees of Separation idea, meaning that within six steps, we can be connected to virtually anyone on the planet. His clever use of the word pixel means just that, we are all connected. Everyone. Especially in this digital age.

Duty to Respond in a Digital Age

Mitch Joel believes, “it is critical that you never be silent if someone emails you, blogs or podcasts about you, or interviews you for an article . . . Make this your one golden rule, and make a commitment that you will never break it.”

I try my best to respond to legitimate online communiqués. I know that there are several that I have ignored over the past several years. And I am trying to get better at that.

“Having the time to response is a huge and realistic issue, but we can’t afford to have the attitude that people are too busy to respond to every comment or posting.”

“As much as you can, be responsive and be thankful. Do it now. And, as the old saying goes, “People always have time for the things that are important to them.”

That makes sense. It only takes a minute to fire off a quick response if we do it as soon as it comes to our attention. I know that I’ve opened email and said to myself “later” only to have that message sit in my inbox for weeks and weeks. And then, it seems like I’ve missed the opportunity to even respond anymore. And I delete the email.

Finding New Ways to Use Everything

“Did you know that 20 percent of all searches done on Google every single day are searches that have never been done in the engine before?

That’s crazy. I figured people searched for the same things over and over again. I guess not. There are novel searches being done every day, and not just people looking for books. See what I did there?

“Google also engenders a philosophy that the consumers and the community are going to do many things to your business that are unknown and potentially not in your control, You have to be open to this type of reality. The inventor rarely knows what the invention is for.”

I know that I have used a TV entertainment stand as a book case for binders and often come up with inventive ways to use what I have at hand.

“The primary function of Twitter was to let everyone know what was happening in your life at that particular moment . . . Somewhere, someone along the way started adding the @ sign with no space and then the user name of the person they were responding to . . . From there, everyone was able to do a quick search for the phrase “@chasemarch” to see if it was mentioned.

As this idea spread, it became a new way of communicating, connecting, and sharing. The Wisdom of Crowds prevailed, Instead of waiting for Twitter to develop a function outside of the original intention of enabling individuals to connect to one another . . . the community developed a primitive workaround. This workaround has now become not only core to the functionality of Twitter, but . . . this type of communication has widened—without Twitter doing much at all.”

That was news to me. I joined Twitter after this had already become a reality for the platform. A way of sharing became a method of communicating. And it is by far my favourite way to communicate with almost anybody. I rarely use email. Twitter is so much more efficient and effective. I am so happy that early adopters of this platform transformed Twitter into what it is today. Thank you!