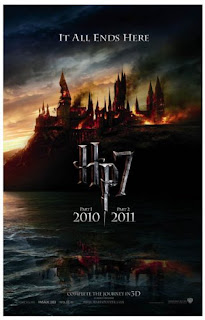 The only movie in the Harry Potter franchise that was true to the book was the very first installment. The first movie didn’t have to leave out any of the important story details. It didn’t need to trim the story down for it to fit in the theatrical format. That first movie was amazing. I really loved it!

I haven’t been impressed with the rest of the movies in the series though. I haven’t been able to put my finger on a concrete reason, other than the old standby – the movie is never as good as the book.

I was hoping this latest installment, HP7: Harry Potter and The Deathly Hallows would finally capture the full magic (pardon the pun) of this amazing book series.  Splitting the movie into two parts sounded like a great idea. The book was quite long and it would have been extremely difficult to tell the story well in one film.

For those of you unfamiliar with the book, not a lot happened in the first half of it. The characters spent a lot of time waiting around, hiding out, and trying to figure out what to do next. The kids needed to come into their own and it was not an easy transition for them.

This is the kind of story that simply does not translate well to film. I think that is why I left the theatre unsatisfied yesterday. Harry Potter and The Deathly Hallows Part 1 was simply not a good film.

The funny thing is that this film did live up to the book. I thought that was what I had wanted. It turns out it wasn’t.

I really wish that the film producers had made a good movie. The script should’ve have been written to please movie-goers and not the legions of fans of the book. Major changes to the plot should have been made to make it a more exciting movie experience.

Instead, I was just bored. I only found two things in the movie that I actually enjoyed.* Those small moments were not enough to save this film.

They should have made a movie. Harry Potter and The Deathly Hallows is already a book. It was a great book too. Too bad it made a terrible movie.

What do you think?


Am I being too harsh?

*future blog post to come on this topic (stay tuned)

Could’ve Been my Wedding Song (Day 23)