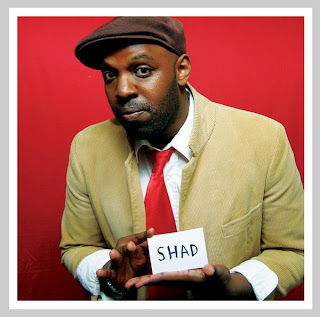 Shad is a talented emcee from London, Ontario. I had the chance to sit down with him for an in-depth interview just before he took to the stage for an amazing concert. This is the transcript of the interview. You can download the podcast for free to hear the interview and listen to some great songs from both of his  albums. Enjoy!

Chase: “All right everybody, this is Chase March and I’m here with Shad at Call the Office in London, ON. How ya doing Shad?”

Chase: “Pretty good. Just honoured to be doing this interview right now because I’ve been a fan for a while now. It’s really nice to meet you.”

Shad: “Thanks, man. I appreciate it.”

Chase: “Yeah, I first stumbled across you with The Old Prince album. I picked that up in Winnipeg, actually, because I was just going through the record store and trying to see what local stuff I could find. I asked the lady at the counter and she said, “Yeah, it’s pretty good.” And at the time I didn’t know where you were from. Since then, a couple people seem to be claiming you.

We’re here in London now and everyone’s saying, “Oh Shad’s from London, that’s awesome” but Laurier in Kitchener seems to be claiming you too.

Shad: “I grew up here. I went to Laurier for four years so I was in Waterloo there a little while but I definitely grew up in London.”

Chase: “All right, your big break was actually on a radio competition here?”

Shad: “It was in Kitchener-Waterloo on 91.5 The Beat, which gets play down here too. There was a talent competition that they put on and I was fortunate enough to win, which paid for my first album which was great.”

Chase: “Excellent, your first album ‘When This is Over’ and that was released in 2005. You did that all yourself?”

Shad: “Yeah, we had the opportunity to record it so I was like, ‘I gotta try and put something together’ even though I really didn’t know what I was doing. So, that was a lot of fun, a lot of hard work, and it felt great to be able to put that project together.”

Chase: “What’s one of your best songs of that album?”

Shad: “They all kind of have a place for me because that was my first album. I did one with my mom, track 4 there, so that one’s always a special one for me.”

Chase: “I want to talk to you, a little bit about the writing process because your rhymes are amazing, they’re really intricate, and they seem to be saying a lot of things. From what I understand, you have a different way of writing from a lot of other emcees.”

Shad: “I guess you could say that. I think a lot of guys sort of hear a track and play it on loop and write to it. Whereas, I will write here and there from time to time. When I hear tracks, sometimes I piece stuff I’ve already written together with it, or I’ll hear a track and sit with it for a long time and then write something with it. A lot of guys I know just sort of sit and write with that track at that time and that’s never really been my process.”

Chase: “How do you feel about ghostwriting?”

Shad: “I think maybe it has it’s place but it’s not what I’m interested in at all.”
Chase: “So, you’ve never written for anybody else?”

Shad: “No. It’d be kind of fun, maybe, for me but I don’t know if it’s something I’m that interested in. I’m more interested in writing in my own voice and my own style as opposed to writing in someone else’s voice and style. But, I mean, it’d be a fun challenge to do one time. But it’s less what interests me as an artist.”

Chase: “So you’ve been making a lot of noise in the Canadian scene here. You’re showing up on everybody’s releases. I was listening to Grand Analog on the way down here and I was like, ‘Oh, there’s Shad. I forgot he was on this album,’ and you’re on the Classified album, and on Louwop: Dirty General, you’re on his. So, you’ve been making the rounds there, getting quite a fan base with even the big artists that are in this country.”

Shad: “I toured with Classified a couple years ago, so that was cool to connect with him and we’ve stayed in touch. It’s fun working with (other artists.) I don’t end up working with too many artists on my albums for no real reason. I just don’t end up doing that too much so it’s cool to work with other people on their projects.”

Chase: “Definitely. I really like your lines. I want to touch on some of your lyrics here, especially in ‘Brother.’ That’s got a really nice video to it and a nice message there. So hopefully you people have seen that, if not, they can YouTube it. You talk about the importance of education in there a lot. One of your lyrics says, ‘So young blacks don’t see themselves in scholastic pursuits or the more practical routes, it’s making tracks or it’s hoops’ and further on you say that it narrows ‘the conception of what’s black isn’t true.’ So it seems like you’re fighting against a stereotype here.”

Shad: “Yeah, that’s what that song is kind of about, It’s about stereotypes and image and all of those ideas and how they affect young people and how they affect people of colour and their perceptions of themselves. And how it affects everybody’s view of the world and what’s real and what’s not real, what’s fabricated and what’s not. So, that’s kind of what that song is about and hopefully we will transcend that some time as a people.”

Chase: “Yeah, I find that, ‘cause I’m a teacher too, and a lot of the kids have misperceptions of what hip-hop is and what it means to be a rapper. Some think that you need to get shot or something. Some kids like 50 Cent because he was shot. Going back to another one of your lyrics that I really like is, ‘the only time I use a bullet is in Microsoft Word.’ That line is awesome.”

Chase: “So they can see that rap isn’t just all about that. I try to show that there are a lot more different avenues that just that.”

Shad: “Hopefully kids can know that hip-hop is a way of expressing who you are and taking pride in who you are, no matter who that is or where you’re from, no matter what that is and just sharing that in a way that’s creative and fun. So, if somebody is kind of more hard or whatever and that’s their swagger than they can express that and if they aren’t that, then they can also express that. That’s the cool thing about hip-hop. It’s about being original. It’s about just being proud of who you are.”

Chase: “Yeah, definitely, ‘cause you can see all sorts of different things when you really dive into the culture that a lot of kids don’t see from the pop radio.”

Chase: “Like one of your opening acts today, Grand Analog. They’re using more live instruments and some people might not even consider it hip-hop some of the stuff they do because it’s just so all over the map. But it’s still hip-hop.”

Shad: “It’s still hip-hop. Yeah, and I think it’ll be cool for people to get to see that. You an take hip-hop in a while lot of different directions.”

Chase: “That’s what I really like about the culture too. I want to talk to you about downloading and the current state of how we consume music. In your song, ‘I Don’t Like to,’ it sounds like you’re telling us to not buy your stuff ‘cause you say, ‘I say don’t buy it, pirate me, if it’s ill it’ll spread virally,’ and then you got a little play on words when you say ‘keep it on the down lo,’ like download, almost. So is that just all in fun? Obviously you want people to buy it.”

Shad: “I mean, yeah, it’s all in fun. I mean, obviously it’s great if people go buy your disc at a show or whatever and put money in your pocket and even help some of the people that help create my career. But at the same time, the most important thing is to always just share music. I think we live in a  day and age where good music can just spread. If good music gets shared, that’s just a positive thing. It’s not the situation where it was before that only certain artists could get their music out because they controlled the avenues to get the music out. So, I mean, every artist likes to get paid for what they do but at the same time, I think the important thing for music as a whole is, I think we live in a really good era for music ‘cause it can just be shared, you know?”

Chase: “That probably speaks to your success in the States too because this album came out almost three years ago now but didn’t it just get released in the States?”

Shad: “Yeah, it just came out there like half a year ago or something. That’s been a really positive thing about the new age of music has affected my career. It’s just the fact that I could put an album out and it has a longer life than just a few months. It’s like, people are hearing about it on the Internet and it gets spread.”

Chase: “Which is awesome because hip-hop seems to be disposable these days. It seems that there is something brand new every day and you always have to be, especially in the blogospehere or on radio like we are, you always have to be hip with the new stuff. You gotta play the new stuff all the time but I still want to bump your album from two years ago and I still want to hear the old stuff. If it’s good it’s good, it translates, ya know, it’s not stuck in time.”

Chase: “Quest for Glory is a really good song. ‘I’m the biggest thing out of Canada till Quebec separates.’ That’s hilarious. Hopefully that doesn’t happen.”

Chase: “All right, so this is ‘I Don’t Like To’ off the album ‘The Old Prince’ which is awesome. If you don’t have that, go get it. It is well worth the ten bucks. So this is Chase March, listen to the song and we’ll be back in a minute.”

That ends part one of the interview transcript. Please come back tomorrow to read Part 2 or go and download the podcast so you can listen to the entire interview right now. Please subscribe to DOPEfm as well so you can receive all of our great hip-hop mix shows and interviews.