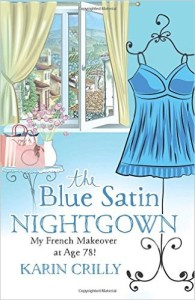 The Blue Satin Nightgown: My French Makeover at Age 78! by Karin Crilly

I have been doing some reading about how women need to reinvent themselves in second adulthood. It’s a very interesting concept that has adults trying to figure out what to do now that they find themselves with a significant amount of time after retiring. Their children are grown and self-sufficient too. A new world of possibilities open up and it is like starting all over again in a new phase of life.

So, when I was approached to review this book for my blog, I thought it would be a nice companion piece to the other material I had been reading for a school project I had been working on.

Karin Crilly had once wished to live in France. She had her honeymoon there so many years ago. Now at the age of 78, and widowed, she decided to return there to live for a year. She didn’t know the language or anyone there, but still set out alone on this new adventure. This memoir tells her story.

The first chapter won a writing contest in 2014 and motivated her to continue the story and complete this book.

Crilly starts off every chapter with a recipe and then fills us in on her adventures in a foreign land. It is interesting to see the cultural differences as well. We see that she navigates this new world quite effectively, even though she still doesn’t have much figured out. It’s a journey of discovery that will help her define who she is in this new age of adulthood.

It’s Karin Crilly’s French Makeover at Age 78. Perhaps she will even find love and get to use the blue satin nightgown referred to in the title. But I won’t give away any spoilers. You’ll have to read it for yourself.