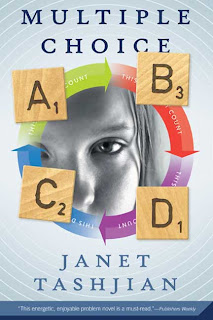 Multiple Choice is a novel by Janet Tashjian that I knew I just had to read. I found it in the school library and was immediately drawn to it.
It was one of those books that I just wanted to dive into and forget about everything else. Of course, I couldn’t do that. I was at school after all, so I borrowed it even though the library was technically closed at the time. It was late June and that’s the time librarians frantically try to account for every book that they started with this school year. Don’t worry I brought it back already and all is well.
The story revolves around a fourteen year old girl who constantly obsesses over everything.
“I wish my brain were a toaster. That way I could use it when I wanted to, and when I was done, I could pull the plug and shut it off. The reason I’m thinking about this is that I’ve just finished conducting a very important experiment. And after weeks of compiling and analyzing data, I have come to a scientific conclusion.98.762 percent of my time is spent obsessing. About what? Everything.Saying the wrong thing, doing the wrong thing, wearing the wrong clothes. . .”
She loves to play word games and make anagrams. One day after playing a game of Scrabble, she decides to keep four letter tiles and put them in her pocket. She keeps an “A”, “B”, “C”, and “D” and uses them to help her make decisions.
Her creative real-life game of “Muliple Choice” leads her to do some interesting and bizarre things, but in a way it sets her free of her constant worrying.
The book is extremely well-written and I had a hard time putting it down. That’s why I am adding it to my Recommended Reads.

A Podcast of Inspiration and Encouragement for Writers (Barbara Abercrombie Interview)