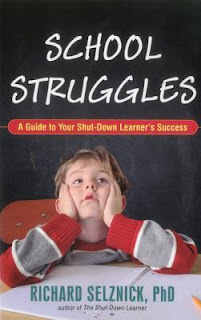 Chase: “All right everybody, this is Chase March. I have Dr. Richard Selznick on the phone right now, author of School Struggles: A Guide to Your Shut-Down Learner’s Success. It’s quite the read. I underlined passages and took all sorts of notes as I read it. As a teacher, I think it is important for use to reach every student, especially students who have shut down.

You have some interesting tips in this book. One of which is to not go by a child’s age as a signpost of what he or she should be able to do. Here’s a quote from the book, “… when talking to children at school, it is essential to set aside their real age and to view them instead as being much younger than that in their maturity level.” What do you mean exactly by that?”

Dr. Selznick: “Keep in mind that I am talking about kids with learning disabilities and ADHD, not all children. A number of years ago when I got my first job in a private school for kids with learning disabilities, the learning director told the staff to make sure they had their age adjustment correct. Let’s say a 15 year old, as to the level of maturity and what they should be able to do at that point in their life. The director’s caution to us was that we needed to be very careful with that because many of the children are not yet there. They have difficulty with independent functioning, thinking skills, and even social maturity.

I distinctly remember talking to a 15 year old girl and it was almost like she was 11. And by looking at her like she was 11, not talking down to her, but by thinking of her like she was 11, it helped to see where she was developmentally. I find that a lot of parents and teachers, quite frankly, they’ll use a lot of that should language. ‘They should be able to . . .’ and I have the child in front of me, I’ve evaluated the child, and they’re not even close to that level of what the school or parents think they should be able to do. By adjusting that, I find it takes some of the heat out of the interactions between the child and parent and child and school. It doesn’t mean going soft on the child. It means looking at him or her with a more realistic set of eyes or lenses.

Chase: “I think it is important to know your child, whether it is your biological child or your student. It’s important to know that but part of the problem, you address it in your book, is the curriculum ship. We’re expected as teachers to get this across and for the students to have this kind of a response. I actually have something called exemplars that show you what a level B should look like for this great. And quite frankly, not every students B-level work will look like that. It makes it tough because it feels like I am supposed to report things a certain way for a certain level.

Dr. Selznick: “I’m sure you feel that way a lot. That notion of the curriculum ship going forward. It must go forward. It’s leaving the dock in September and it’s going to arrive at port in June. And no matter what, we’re getting there. That’s great for about 60 percent of the population but for the 40 percent of the other kids, they’re not able to stay with that boat. They can’t keep up with it.”

Chase: “Another great quote from the book is, ‘One of my rants was triggered by a line in a report on a learning disabled / dyslexic child that said, ‘Frank must learn to accept responsibility for his reading comprehension and to develop his own strategies.

Frank is seven! He’s a weak reader! He’s not going to accept responsibility for his reading comprehension or develop his own strategies.’

That really spoke to me because I know that I’ve written a report card comment almost like that one.”

Dr. Selznick: “It’s a very real quote. What happens to me at work or in my office is that I will have an experience or a moment like that where I have to write it down. That came across my desk and I’m looking at this child who has reading problems, attention issues, and stuff like that, and I’m reading this comment from a teacher about how he has to take responsibility for his learning. How can he begin to do that? He has to do it? He’s about ten years away from maybe being able to do it. I don’t want to be seen as somebody who is purely enabling them, but how can that be?”

Dr. Selznick: “You’ve seen it in the book. I call it the smooth road and the rough road. 60% of the population is on the smooth road and since kindergarten they’ve been moving down that road. There aren’t that many problems. Things are moving along. But then there’s that other group, which is who we are talking about. It’s a rougher road and much tougher for those kids.”

Chase: “I think we are doing a better job in education these days. I’ve been doing a lot of reading on this and we have bump it up walls and strategies and learning goals now. We start with the end in mind and think about ways in which we can move kids up from a C to a B. We think about these kinds of things.

A quote on page 70, of your book, School Struggles reads,

‘As a general rule, I feel that we need to look at the task being given, and if it is over the child’s head, we have to back up and make it simpler, more digestible. Sure, trying harder (a frequent request from parents and teachers) may help some, but over time this wears the child down and cannot be sustained. It is up to us, as adults, to examine what we are asking the child to do and see if the task truly falls within the child’s zone of competence.’

I like that quote. It’s something we really need to think about. The days of one-size-fits-all education are over. We can’t expect everyone in the class to be performing at the same level and reading the same texts. It is not going to give them success in school.”

Chase: “Exactly. So, I’m reading this book and I’m going along, nodding my head in agreement with most of it, and then I come across this passage,

‘If you have a spouse, get him (yes, I know I am making an assumption here)’

I guess, mothers more often read this kind of book. Or perhaps, this is a stab at teachers as well. Most teachers do seem to be women and I guess moms might be more concerned about this than dads. But I felt that I had to point that one out to you.”

Dr. Selznick: “It’s funny because my most recent blog was ‘Moms, Listen Up. Trust Your Judgment’ and I put it in parenthesis (Dads too.)

Interestingly, today I had a dad come into the office with his child. But 90% of the time, it’s a mom by herself or the dad is being dragged in by the mom. That dad do tend to, I’m generalizing, be a little more, ‘Well, he’ll grow out of it. He’s fine. I was just like that. What’s the problem?’ Ya know, that kind of talk.”

Chase: “Ya know, to a point, that happens. Just speaking personally here. I have one younger brother. And I was good in school. I was the smart one who would answer every single question. And the next year, the teacher would get my brother and kind of expect the same thing, and he struggled through school.

What is amazing now, we’re both in our thirties, and he is reading incredibly scientific stuff all the time. He’s a better student now that he’s no longer in school. He’s always reading and telling me all sorts of interesting things. I’m not so much into science. I’m more into humanities and literature. But, it is interesting to see how he’s become a good student now.”

Dr. Selznick: “I’m putting a plug in now for my first book called The Shut Down Learner. That book was about children and also adults who are what I call “Lego Kids.” They are more science-brained and not so great early on with reading and writing. So they might read better, like your brother, later on for more technical reading or reading in their field. But during the early years, there was a lot of struggling and many of those kids were shut down. So, you might want to read that one too.”

Chase; “For sure. This was an interesting read. School Struggles: A Guide to Your Shut Down Learners Success and your earlier books sounds just as interesting. We’re talking to Dr. Richard Selznick and we’re only just getting started here. Please come back tomorrow to continue reading the rest of the transcript, or you can listen to the entire interview right now with the player below. You can also download this podcast for free.

Thanks for tuning in. See you here tomorrow for the conclusion of this interview.”

Download the interview as an MP3 or stream it with the player below. 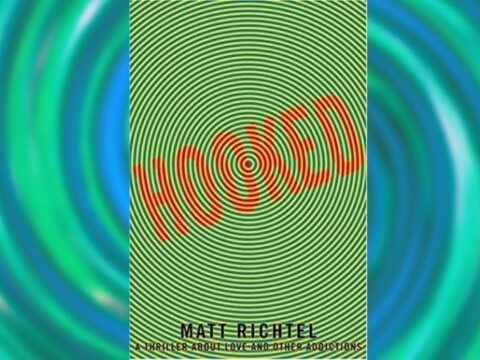