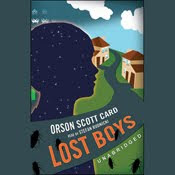 I really love Orson Scott Card’s Ender’s Game and the series of books it spawned. Yet, I haven’t read any of those books.

I’ve listened to the audio books instead and for good reason. They have sound effects, music, and full cast narration. Card, himself, lists those audio productions as the definition collection of his work. He believes that they are the best way to enjoy his writing, and I totally concur. They are spectacular.

So when I saw this audio book at the public library, I just had to check it out. The book is called “Lost Boys”

The first thing that surprised me about this novel was that it seemed to be a fairly straightforward family drama. It’s about a computer programmer who had a huge hit on Atari but hasn’t really followed up on that success. Out of necessity he moves his family for a job and starts to program for the Commodore 64. There is a new machine starting to make a name for itself though and some of the programmers are focusing their attention on the IBM.

I got so lost in the story that I never even thought about what the title might mean. I really like the family drama as a genre and didn’t even stop to think that it was weird for an author primarily known for his science fiction to be writing a nice, normal story about a family.

I don’t want to spoil the story for you here because I was quite surprised by it. All I can really say is that once you get invested in this family and the situation that they are in, there is a subtle shift in the story that allows certain science fiction elements in. It’s not a cheat or a crazy plot twist either.

This story really captivated me. At the end of the book, there is an afterward recorded by Card himself. He talks about  how this was a difficult book for him to write and how it may be difficult for some people to read as well (due to the subject matter.)

The good news is that Stefan-Rudnicki is back as the narrator. He did such a great job with the Ender’s Series and is a familiar voice for Orson Scott Card fans.

I enjoyed this story all the way through so I am adding it to my Recommended Reads list. Enjoy!

Superheroes, Time Travellers, and Fairy Tales (Graphic Novels Have it All)