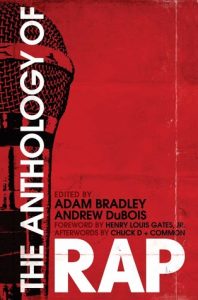 The Anthology of Rap by Adam Bradley and Andrew Dubois (editors)

Rap is poetry. The way emcees put together words and deliver them can be magical. This book tries to highlight that be stripping everything else away except for the words on a page. The editors let the words speak for themselves as well. There are no annotations and  nothing to help interpret any given line.

There are a few essays about different eras and times in the history of the art form, however. There are also brief introductions to each act before their rhymes are laid out in front of us on the page.

This was a nice read and I will be writing one or two more posts about it in the near future. Here are a few things I took away from my dive into the book.

“The first rap record to be explicitly political both in its lyrical content and in its method of production and distribution, “How We Gonna Make the Black Nation Rise?,” released in 1980 on Clappers Records, is an example of a song practicing what it preaches.

The Collective Effort is a group of MCs that includes both male and female members that urges “their listeners to consider the disjunction between good time music and the actual times from which it derives. The lyrics, against their ironic sonic backdrop, diagnose the danger of becoming “pacified” to the point to living death and outline a litany of social problems”

“The women from Sequence wrote their own rhymes; in fact, they often wrote rhymes for their label mates. Cheryl Cook was especially active as a ghostwriter, penning verses for “8th Wonder,” “Apache,” and “Livin in the Fast Lane by the Sugarhill Gang.”

Spoonie Gee, apparently holds this title. It quickly becomes apparent when reading through the lyrics here.

Spoonie Gee was an original member of Treacherous Three. When he decided to go solo, Special K joined the group. Their first release, which features Spoonie Gee, “came forth with a song that contains more syllables per line than any rap of it’s time.” This was for “The New Rap Language.”

Chuck D got his start as a radio DJ. He definitely is one of hip-hop’s great voices, but did you know, “he used none of the cliched familiar, conventional braggadocio emceeisms! He never even talked about being the best, and he never criticized another emcee. He never even compared himself to another emcee.” That is really cool and hard to do.

Black Panther Was a Middle School Kid Once Too

Double Up with WIB Rap Radio