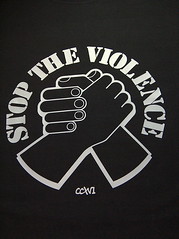 In the 1980s rap exploded in popularity. This allowed a brand new voice to be added to popular discourse, the voice of the black man.  Rap groups started to call attention to issues such as racism, freedom of speech, police brutality, racial unity, and countless other issues that affected the black youth.

Due to the popularity of rap music, and its capability of carrying messages, people began to hear these about some of these issues for the first time. Groundbreaking groups such as Public Enemy led the way for an entire sub-genre of hip-hop known as political rap.
These strong black men with very strong opinions could be heard in tape decks across the nation. This scared quite a few people who didn’t understand what was happening. A lot of people wanted to shut down this music and they tried to do so. They said it was a fad and that it wasn’t appropriate.
This next song was very off-putting to a lot of people. It’s “F*@k Tha Police” by NWA.
If you’re not familiar with NWA, you are probably familiar with the solo artists that came out of this group. NWA was Dr. Dre, Ice Cube, Easy E, MC Ren, and DJ Yella. They were raw and edgy and had a style that brought forth a new sound in hip-hop. We will cover that in more detail in the next episode of Know Your History when we look at gangsta rap.
That was NWA “F*@k Tha Police.” When I first heard that track, I was really taken aback. First, by their excessive use of swearing. Most of the rap that I had heard up until that point was pretty clean. Secondly, their content surprised me. I had a pretty sheltered life and hadn’t even realized that police brutality existed.
Going back to Chuck D’s comment that “rap music is the black people’s CNN.” It just goes to show you how much we learn through some of the lyrics in hip-hop and how I might not even have been exposed to certain issues if it wasn’t for hip-hop.
I could talk about NWA for the rest of the show, but I have more ground I’d like to cover. Rest assured though, that NWA will be featured again in the very next episode of Know Your History as their influence and importance in hip-hop culture extends well beyond the political sphere.
Let’s move on to Boogie Down Productions. Some of you younger cats might not know who BDP is but I’m sure you know its main MC. BDP was Krs-One and Scott LaRock. In 1987 they came out with their historic album Criminal Minded. In that same year, Public Enemy came out with Yo! Bum Rush the Show. These two albums set off a new minstate in hip-hop. They showed us that social commentary and the message in the music was just as important as the overall sound of the record.
Unfortunately, BDP only got that one album out before founding member Scott LaRock was brutally murdered in 1987. Krs-One put out a tribute and a call to action called “Self Destruction.”
This track featured the best talent of the time; Doug E Fresh, Kool Moe Dee, Public Enemy, Miss Melody, MC Lyte, and many more. Together they formed Stop the Violence Movemement. This song is called “Self Destruction” and a very important one to play tonight.
Wow! The star power on that track. Krs-One got those artists together after Scott LaRock passed away to discuss and help improve the situation for black youth. Scott LaRock shouldn’t have had to die brutally like that. It’s interesting to see all of these rappers from different sub-genres coming together to speak for unity.
Just-Ice has a great lyric in that song. He says, “You don’t have to be soft to speak for peace.”
I think Krs-One really adopted that. He took on the name of “The teacher” and started speaking on a variety of different issues. He even carried on the BDP name for several years in honour of his lost partner in that group. When he did start releasing music under his own name, Krs-One, he kept the positive influence there.
Groups like Public Enemy, NWA, and BDP called attention to real-life issues. They aren’t the only ones, however. I have run out of time though. I wanted to play Paris today as well. You can look him up on your own in the meantime. He was actually a bridge of the first era of political rap and a new wave of it that emerged in the 1990s. Some of the groups in this second wave were Paris, the X Clan, The Disposable Heroes of Hiphoprisy, and Poor Righteous Teachers.
In the late 90s spanning to today, there was a third wave of political rap and is referred to as conscious rap. Of course that would never have been possible without the contributions of Public Enemy, BDP, and NWA.

Hope this has been illuminating for you. Thanks for tuning in. Don’t forget to download the show for free. We’ll see you next month. Peace!

Thanks for tuning in!