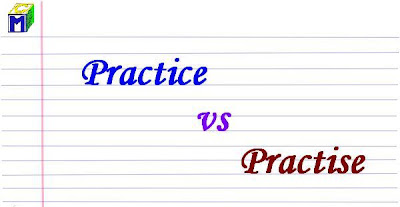 Here is a great quote from a legend in Canadian Hip-Hop. It’s from Maestro Fresh Wes and it’s about how you have to work at something to achieve success. Apart from this quote being inspirational, I’m highlighting this passage to illustrate the difference between the spelling of “practice” when used as a noun and “practise” when used as a verb.

“When I was starting out rhyming, I used to practise with my good friend and first DJ, Greg Nathaniel (DJ Greg). Like I mentioned earlier, I had a bad habit of rhyming faster than the track, and it frustrated Greg when I rapped out of sync with his 45s. Over and over, he’d tell me to stay ‘in the pocket’ with the beat. It took a lot of steady practice, but by the age of fifteen, I was getting really nice with the verbals, and because of that, I gained a lot of confidence.”

Wes “Maestro” Williams uses both forms of “practice” in this paragraph from his book Stick to Your Vision: How to Get Past the Hurdles and the Haters to Get Where You Want to Be.

The first time he uses the word, he is talking about the act of rapping itself.

I used to practise with my good friend

He is working at his craft by practising. This is a verb and as such, it should be spelled with an “s” just as it is in this passage.

The second mention of the word is in a different context.

It took a lot of steady practice

This time, the word is being used as a noun. Practice is the thing that helped him get better, to start using more intricate wordplay, to have a better flow, and to take his art to new heights. When practice is used as a noun, it is spelled with a “c.”

I find that the traditional way of spelling practice is falling by the wayside. I make sure I spell it correctly depending on whether I am using it as a verb or a noun. But many people try to correct me on it. For instance, your computer will often auto correct any mention of the word in your document to the “c” spelling of the word. The only way to get passed this is to make sure your language is set to English: Canadian.

This is something we should be teaching our students. It’s important to note that the spell check and grammar check on the computer can often be wrong. We shouldn’t just blindly follow the computer and change everything it wants us to.

Would you believe that I have had some students think they’ve spelled their name wrong simply because the computer doesn’t recognize it?

Maybe I am being a bit picky here but I think spelling is important and I want to hold on to our traditional spellings. Words like colour, centre, behaviour, and practise are words I want to see spelled correctly. Is that too much to ask?

Unworn Clothes in the Closet