I started The Chase March Show way back in June of 2009 when I had the opportunity to interview The New Cities.

Since then, I have posted 18 episodes that have featured interviews from rappers and Olympic athletes. I even featured a mixtape that I made.

I would like to see my podcast stay up forever. I would like to update it whenever I feel like it and not have to worry about producing monthly episodes. However, mypodcast is cleaning up sites that aren’t updated regularly and have warned me that I need to keep a monthly schedule of updates to avoid deletion.

I don’t want to splinter my time any further than it already is. As such, The Chase March Show podcast will be shut down soon. I will try to move the shows so you can still catch them but in the meantime, if you want them, please go an download them before they are gone. 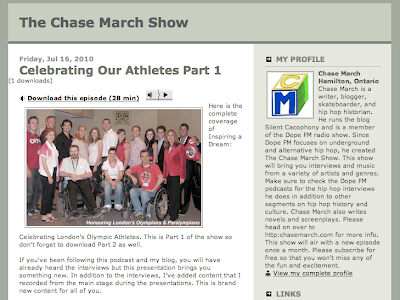 Thanks for all your support.

4 Comments on The Podcast Is Fading Away