My father really enjoyed the Planet of the Apes movies. I vividly recall watching them together on television when I was growing up. I’m not sure I completely understood what they were about, but I remember enjoying them nonetheless. 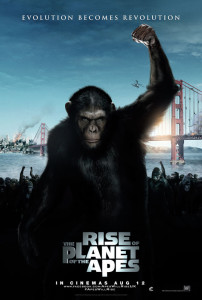 When the film series was rebooted in 2011, I was pleasantly surprised by how the filmmakers respected what I thought was the source material. There were all sorts of Easter Eggs and ties to the original 1968 theatrical film.

I brought the DVD over to my dad’s place and we watched it together again, all those years later. Unfortunately, he passed away and I can’t talk to him about my discovery of the novel that sparked the whole Apes phenomenon. 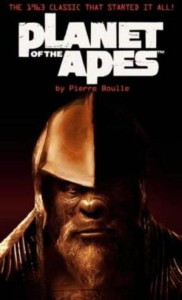 Planet of the Apes by Pierre Boulle

Published in French in 1963 under the title of La Planète des Singes, the original novel is quite a bit different than the 1968 film adaptation. That being said, I thoroughly enjoyed it.

As I read the book, I looked forward to rewatching the original movie so I could compare and contrast the two. 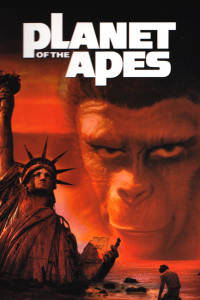 I hate that this poster shows the finale of the movie. I admit that it is an iconic image but it is also a spoiler and it bugs me that the film is still advertised like this. This shot was even on the DVD menu when I watched the film again last week. Even more pointed is that this scene doesn’t exist in the novel.

The astronauts in the film actually do visit an alien world. The monkeys speak a different language and it is up to the main character to find a way to communicate with them and show his intelligence. The human characters on this planet also don’t wear any clothes. They are completely naked. I can see how both of these points needed to be changed for the movie. It only makes sense.

It made sense for the monkeys to speak English, for the main character to be called Taylor as opposed to Ulysse. But the film version did need to find a way that Taylor couldn’t just talk right away. He had to be caged up like an animal and suffer through that. In the film, he is shot in the throat and it takes him some time to recover his voice.

The novel explores the notion that primates are good at imitating and that something must have happened for them to be able to imitate man so well. Both the film and novel explore the idea that apes derived from man. But the novel is able to explore this notion in much more detail.

The film and the novel both explore an archaeological dig that uncovers human artifacts that don’t make sense in a Simian society. In the movie, the native human characters are completely mute, but in the novel, they make animal utterances and noises. Not sure why they didn’t in the film version.

In the novel, the main character is a little more likable. He is not a know-it-all as portrayed by Charlton Heston in the film. Nova is also described as the most beautiful girl he has ever seen. That didn’t seem to translate so well to film.

Another theme in the novel is the one of rebuilding a human society. Ulysse feels like it is his mission to do so. He actually has a child with Nova. The authorities see this child as a threat though and a few monkey friends help him return to his spaceship. The three of them finally make it back to Earth, but due to the realities of space travel over long distances, they arrive thousands of years later . . . only to find that the same pattern of evolution has happened. It’s a scene that resonates just as well as the Statue of Liberty scene in the movie.

If you like the movies, I recommend giving the book a try. That is if I haven’t given away too many spoilers for you.

Planet of the Apes (Book vs Movie)