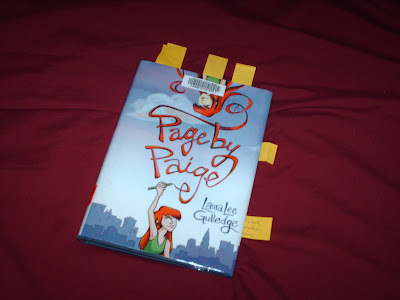 Page by Paige by Laura Lee Gulledge really took me by surprise.

I have never marked up a comic book with this many sticky notes before. This book spoke to me on several different levels.

The main character is named Paige and she is a reluctant artist. When her family moves from Virginia to New York City, Paige finally surrenders to her desire to create art and buys a sketchbook. She keeps her art to herself for a variety of reasons. Eventually, she becomes comfortable displaying it and acknowledging that she really is an artist.

This graphic novel is beautifully illustrated in black and white sketches. It feels like it has been drawn by Paige herself and reads like her memoir. She plays with imagery and creates pictures that come to life, pictures that really capture her feelings, and even a few that illustrate a pun. It really is amazing how seamless the words and pictures are.

One cool thing about this book is the “Page by Paige Soundtrack” that is included in the back. Of course, it is just a list of songs that were either referenced in the book or have inspired Laura Lee Gulledge.

I was unfamiliar with most of the songs she listed. But since I enjoyed the book so much, I thought I’d seek them out. I then added a few songs that fit with the theme of the book to craft the first ever mixtape I’ve ever made based upon a comic book.

So here it is, Page by Paige: The Mixtape 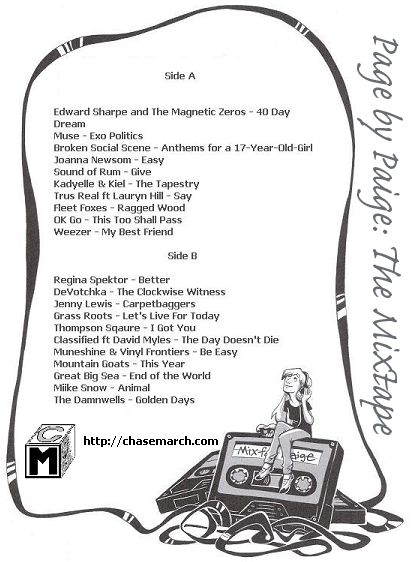 The songs all blend into each other so you will not hear a song fade out. I divided the tape into 2 sides to keep the feel and vibe of the old-school mixtapes I used to make. This one, however, has a track for each song. There are 21 tracks and they will fit on a standard CD.

Need Something to Read?

Celebrate Christmas with 3 Hours of Mixtapes