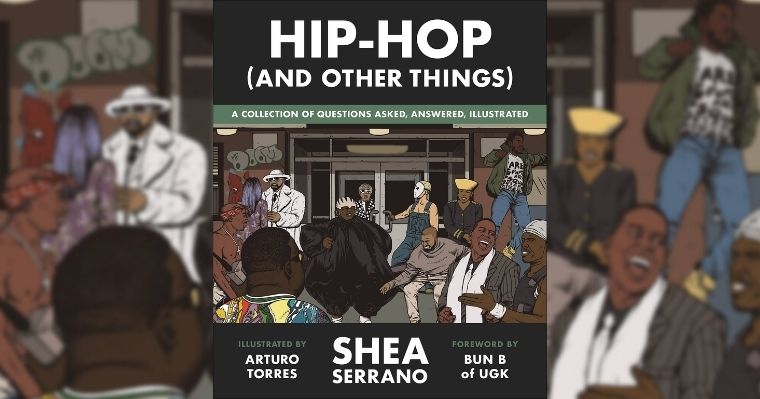 Hip-Hop (And Other Things): A Collection of questions asked, answered, illustrated by Shea Serrano and Arturo Torres

This is a beautifully illustrated book that dives into some interesting elements of Hip Hop music and culture.

Bun B of UGK penned the introduction and recounted some advice that he got from from a legend . . .

Serrano also compiles and interesting mixtape that we could all try making. He calls it “The Magic Age Mixtape” because it covers “that period between late adolescence and early adulthood where we form our biggest, most substantial feelings toward music.”

Here are his instructions.

I liked Serrano’s history lesson on rap battles, as we know them today. He writes,

“Prior to Busy Bee vs Kool Moe Dee . . . any sort of combat rap between two people or two groups had mostly been characterized by each side taking turns trying to get the crowd as excited as possible. Kool Moe Dee decided to go a different way.

He didn’t bother engaging with the crowd at all. Instead, he took out an ax and swung it at Bust Bee’s neck. He immediately started talking shit about hi, making fun of the way he rapped, saying he copied other people, laughing at the very thought of his general existence. It was ruinous. Poor Busy Bee, he nerve stood a chance. He was playing a whole different game . . . Busy Bee wasn’t ready for the level of violence that Kool Moe Dee was operating at. In truth, it wasn’t something he’d even considered, because it wasn’t anything that anyone had ever considered. Kool Moe Dee invented it.”

Yes or no is a management strategy that I would occasionally employ while I was teaching. It’s a very simple, very effective (and, f we’re being very honest, very manipulative tactic that you utilize when you want to try and pin down one piece of a knotty, complicated situation.

In turns out that the author was also a teacher. That’s pretty cool. I find that a lot of Hip Hop heads are educators.

Serrano reccounts a strategy he used in classroom management. He writes about a situation where on student threw a book at another. He employed the YES or NO strategy like this . . .

“If you say something to John like ‘John, do you think it’s okay to throw a book at someone,’ he is likely going to respond with something like ‘Not usually, no. But in this case yes. Because Mario has been bullying me. It’s been happening all week.’ And John would be 100% right in that assessment of things.

But if you preface it be saying, ‘John, listen to me. You can only answer this question I’m going to ask you right now with either a YES or a NO. You can’t say anything else. Don’t say any other words. Only YES or NO. Do you think it’s okay to throw a book at someone? Yes or No?’ Then (typically) what happens is that the question sits differently in John’s head. He (typically) won’t think of the situation directly as it related to Mario.. He’ll (typically) think of it as it relates to all of humanity. Which is why he’ll respond with No.’

And listen. Robbing a situation of the entirety of its context is not the way to go when you want to arrive at equitable justice. That’s not the point of YES or NO as a management strategy. The point of it is to pin down one tricky piece of a complicated situation. Because if you do that, then maybe you can get your arms around all the other pieces.”

The one weird thing about this book is how many tangents the author goes on. He tends to insert himself into the stories he is telling, he starts with a comparison and sometimes never follows it through, and sometimes he just goes for comedy. The tone is a bit strange and I almost quit reading it because of it. But if you can get passed all of that, you will probably learn something you didn’t.

Sculptor Pays the Price for His Art