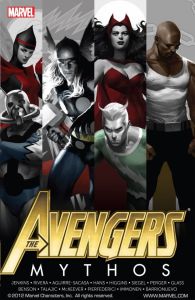 Origin stories are a staple in comic books and in super-hero movies. The stories can be told again and again and you can always find something new in them. This collection is a modern retelling of some of the most pivotal Avengers.

It starts of with a rather bland retelling of Captain America’s origin that relies too much on narrative. It could have been done so much better, IMHO. The Hulk story is done better but didn’t have much else to offer me that I didn’t already know about the character.

The collection also features retelling of Thor’s origin. But I’ve heard it before in books and movies and this one really didn’t offer anything new.

Ant-Man and the WASP had the best story in this book. And it was nice to see a story about Scarlet Witch and Quicksilver. I know that they are going to be in the next Avengers movie and I didn’t know a lot about them.

The Vision story was interesting too. There’s a theory going around the Internet that Coulson from Agents of S.H.I.E.L.D. will morph into this character in the future. It makes sense, now that I know a bit more about him. That would be kind of cool!

Luke Cage also gets an origin story in this book. I think we need to see superheroes of all raaces and religions more often in books. Black Panther also has a quick cameo in one of the other stories. We need to see these characters more often in the MCU.

Little Women – The Next Generation

Get It Done – It Only Takes 15 Minutes. Seriously!