My mother and I have an ongoing Scrabble feud. We can be a little competitive with each other when it comes to this crossword board game. She’s a tough opponent and the games we play are always challenging and fun.

Last week, we tried a variation of Scrabble that we had never played before. It’a called Scrabble: Upwords. This version of the game is quite different from the traditional board game. The letter tiles do not have point values printed on them. Each tile is worth the same amount. The game board doesn’t have any special spaces on it either. As such, it is quite a different game. 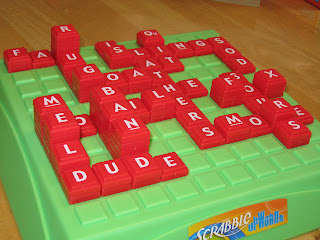 You are able to change a word that is on the board by stacking one or more letters on the top of it. You can only play letter tiles in one direction, either across or down, and you cannot stack tiles any more than five high.

The scoring is a little difficult to understand. For the first half of the game, we really couldn’t figure out how to get a high score. My mom had a hard time wrapping her head around the fact that you don’t get extra points for playing a “J” or an “X” for example.

Instead you score one point per each tile played. If your word exists on one level and has no stacked letters in it whatsoever, you double the score. For example “lathers” in this game board is worth 14 points since none of 7 letters have been stacked on another (7 letters x 2 points each = 14)

My mom was beating me throughout the first three quarters of this game but I took the lead and really put things away when I combined three words together. 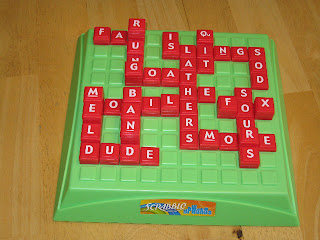 “MOBILE” was a brilliant word for me to play in this game. It’s hard to tell but the “M” was the fifth letter stacked at the top of the word “MELD.” The “E” was also five letters high, the “L” three and the “D” two. As such, that one word alone was worth 15 points

Before my turn, the word “BILE” on the board was actually “FILE” and “MELD” was originally “HELD.” So not only did I put an “M” on top of the “H” to form a new word going down, I also added an “O” across the board and stacked a “B” to spell the the word “MOBILE” going across and “BAND” going down.

In this one turn, I only placed two tiles down on the board but formed three new words, and scored 47 points. Not bad, eh?

I think it took us both a while to figure out that stacking and forming multiple words is the real way to rack up points in this Scrabble variant.

It was a close game and I thought there were a few times when she’d come back and surpass me, but it didn’t happen. I won.

My mom is already demanding a rematch. I better watch out. I’m sure she’s going to be a lot tougher to beat next time around. But that’s just adds to the fun.

A Teacher in the Summer