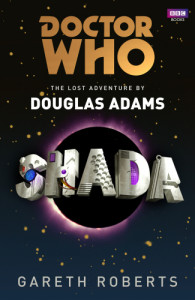 Doctor Who: Shada by Douglas Adams (novelization by Gareth Roberts)

Douglas Adams never completed Doctor Who story has finally seen the light of day in a novel that does justice to the story he likely would have told.

I thoroughly enjoyed the story. There were moments that were laugh out loud funny. The dry with and humour of Adams was able to shine through with the dialogue and some of the prose. Roberts wasn’t able to write in Adams’ voice the way that Eoin Colfer did, but I doubt anyone else really could.

The story was originally meant for the 19th season of the classic series and parts of it were filmed with Tom Baker. Unfortunately, it was never completed. Or maybe, this was the form it was meant to take all along. I’m not sure.

All I know is that, as I read it, I found myself thinking, “I wish they had shot this,” and “This could really work with Peter Capaldi’s Doctor.” There were a few moments where I could picture Christopher Eccleston clearly in my mind as well.

Doctor Who fans, no matter the era, will enjoy this book. You can picture your favourite Doctor as you read it, or a combination thereof like I did.

Crosstalk is a Great Read

Gareth Malone and The Power of Choir

The Walking Dead – At War Again