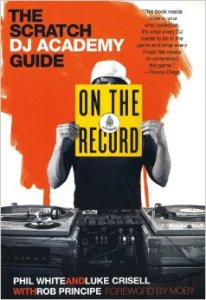 On the Record: The Scratch DJ Academy Guide by Paul White and Luke Crisell with Rob Principe

I love the entire idea of a DJ Academy. Giving children the tools to create and participate in hip-hop culture is priceless. Especially since DJ gear can be quite expensive. The cost point shouldn’t deter people from picking up the art, however. That is exactly the mission of the academy.

This book shows how the academy grew from just an idea to something that has served thousands of people. It gets into the history of DJ culture and has exercises and coaching sessions for any would be DJ who can’t visit or enroll in the academy.

Here are some of the highlights from my reading . . .

“In 1935, American newspaper and radio commentator Walt Winchell coined the term ‘disc jockey’ in reference to Martin Block, whose ABC radio show Make Believe Ballroom was receiving twelve thousand letters a month. The moniker seemed to suggest that the announcers passively “rode” the disc, implying that they were cursory figures. But the term stuck.”

“In 1965, Terry Noel, resident DJ at New York’s Arthur club, became the first well-known spinner to build what we now refer to as a set (series of records mixed together) although these sets with technically imperfect by today’s standards due to the dearth of dedicated DJ equipment.”

Live DJs can Control a Crowd!

“Young people realized that their favorite tracks and exciting new music creatively blended together by a skilled DJ was better than anything a jukebox could offer, and sometimes even better than watching a love band.”

The Invention of the Scratch

“Grand Wizard Theodore is also credited with pioneering the needle drop (whereby he dropped the needle onto the starting point of the record instead of cueing it up. “I also lifted up the needle and dropped it back on the record so it sounded like I was looping it,” he says.

One of the biggest markers of the growing influence ot hip-hop DJing was the commercial and critical success of the 1983 Herbie Hancock single “Rockit,” which prominently featured Grandmixer D.ST, aka Grandmaster DXT, scratching. In addition to gaining a Grammy, the video won all five categories it had been nominated in at the inaugural MTV Video Music Awards in 1984.”

You can Teach Yourself

“Teaching yourself is about being an autodidact. The strength of autodidacts is coming up with their own solutions to problems, and the solutions you come up with sometimes have an interesting curve or texture to them, which give them character. And really, in art, character is what it’s all about. It’s about fusing the techniques that you learn by copying with your own identity and experience that moves things on.” – Matt Black

DJ AM (Rest in Peace) 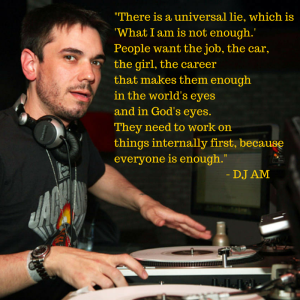 I absolutely love this quotation and this book. I borrowed it from the library but am planning on buying it soon. It has great tips and tricks for DJs and explores the history of culture beautifully. It’s a must-have for all DJs!

I’ll posts more great quotations from this book next week too!