Security was really tight. You could only take photos of the medals and nothing else. 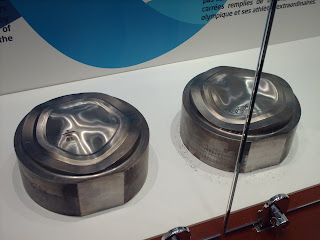 These are the moulds that were designed by artist Corrine Hunt. I was surprised to see that the medals aren’t flat. They have a wavy shape to them.

The tour guide said that there are 40 steps involved in creating each medal. Each medal is unique as well and they actually fit together to form an image.

Apparently there are over a thousand “different designs that are laser-etched onto the metals uneven surface.”

“Each athlete will also receive a silk scarf printed with the complete image so they can see where their medal fits.”* 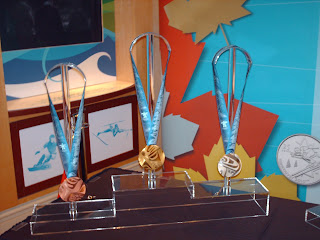 Cameras of any kind are normally banned from the Royal Canadian Mint. I was glad that the ban was lifted this past weekend so I could take these photos. 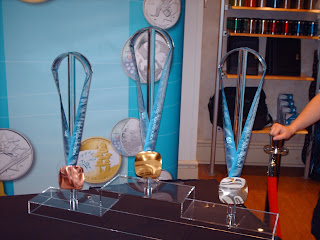 It was cool being that close to an actual Olympic medal. Too bad we weren’t allowed to try them on or touch them. I guess these photos will have to do.

I took the tour of the mint but couldn’t take any more pictures. I did learn that not all coins are stamped. Some designs are cut into the coin by lasers.

Another interesting fact is that we produce some currency for other countries that do not have their own mints. There were about 40 different countries on a display wall showing which coins we have produced for them here in Canada.

* from Impression Winter 2010 pamphlet available from the Royal Canadian Mint.

Something Had To Go

Where Are Your Priorities?