I am getting really tired of Obama-mania. Everywhere you turn there is some special Obama related product. Barack Obama’s image is ending up in the weirdest places. There are T-shirts, hats, scarves, cookies, mugs, and other not so typical pieces of merchandise.

Earlier this week I saw a news story about special Obama Beaver Tails. Beaver Tails are a pastry that can be topped with whatever you choose. They are on the menu for the inauguration and were given away for free on the Rideau Canal on Tuesday. The only thing they did different for these special pastries was to put an O on them.

Yesterday a special inauguration Spiderman comic came out. People lined up outside of comic book stores in the freezing cold. Why? Because of the special variant cover showing a smiling Obama with Spiderman swinging behind him. Within hours of the comic being sold, it was being resold online for anywhere from $60 to over $100. 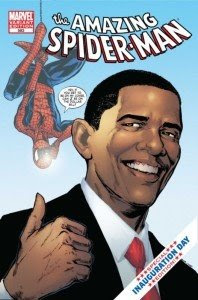 I think this is crazy. The man is a politician. That’s it. He’s not a rock star. Why are people so obsessed about the man? Sure he is charismatic, he looks good on television, but he can’t dance – did you see him on Ellen? He isn’t going to fix all the world’s problems either.

I just can’t understand this hype. People are going to be treating the inauguration like it is the Oscars. I can see it now. It’s going to be a who’s who with journalists covering the crowd and what every one is wearing.

This media circus needs to stop now. I’ve had enough of Obamania! I just hope it dies down soon. I can understand why people think it is such a big deal, but to me it’s not. Another president is taking office. And since when did anyone have such confidence in the government that they need to celebrate it?

In a few years, this will seem pretty ridiculous. He won’t be able to please everyone. He’ll become more than just a figurehead for the hopes and dreams of people who are placing way too much importance on this whole thing.

“It’s time for a change
so don’t go trying to turn inauguration into an all-star game
Let’s act right and show these kids
We can turn “Yes We Can” into “Yes We Did”
and Bush made it hard, be patient
Let that man go to the Whitehouse and do his job.”

The Internet Should Be Free

Transform Any Surface into a Touchscreen with TouchPico

Hip-Hop Has a Birthday? (Know Your History)