This is the sophomore album from my rap group, Mission 5. 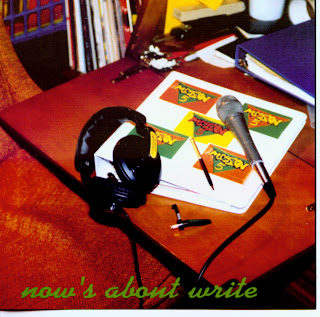 I wanted to show what Mission 5 was all about with this album cover. The headphones, DJ needle, and microphone show that we are all about hip-hop culture. The binder and pen were to show that we were writers as well. I wrote all of my rhymes on that fold down desk back then. I don’t have that binder anymore, or those old lyric sheets, but I still have the desk. 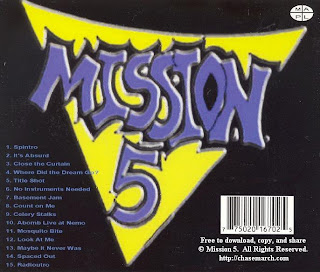 We decided that we wanted to switch up the logo with each release so we changed the colours from green and orange to blue and yellow.

The DJ of the group, Gamma Krush, came up with the amazing “Spintro” concept and title. He scratches all of our names and sound clips to describe us on the opening track. He also came up with “Radioutro,” another play on words that featured the first time we’d ever heard our songs being played on community radio. It really was amazing to hear and I’m so glad I was able to tape it that day. I didn’t know that I’d eventually end up doing a radio show at that very same station.

I am especially proud of this album because I handled all of the production on it. I made all of the beats on an Akai X7000 and then sequenced them on an Atari. That gear was top of the line in the 1980s. Of course, I was using it in the late 90s and early 2000s, but I still managed to make it sing.

I used samples a lot on this album but had to chop and replay the sounds to get the most out of the limited sound quality and sample time that this gear was capable of. It was definitely a challenge, but a lot of fun, and I wouldn’t have traded it for the world.

I hope you enjoy it!

Bring It Back to School

Should’ve Made a Movie – It’s Already a Book