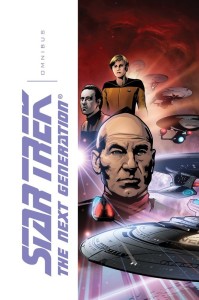 Star Trek: The Next Generation – Omnibus

Later this year, Star Trek: The Next Generation will celebrate it’s 25th Anniversary. It’s hard to believe that it has been that long since this iconic sequel to Star Trek took over television and changed the shape of what was to come. That’s no small feat for a little science fiction series many people thought wouldn’t work.

It’s nice to be able to jump back into the crew’s adventures without missing a beat. This 400 plus page omnibus lets us do just that with some beautiful artwork and amazing storytelling.

I especially liked the mirror universe saga in this collection and how it bridged the original crew from Star Trek VI: The Undiscovered Country, told some more of Worf’s personal story, and involved the Next Generation crew including Tasha Yar and Ensign Ro. And wait till you see who makes a surprise appearance.

The first story in this collection starts off a little slow, but fans who like Picard going on archaeological missions in his spare time will appreciate it.

This collection brings some old foes from the television series back and really captures what we all loved about the series. It was a a good read that I am sure all Trek fans can get behind.