This year, I attended my first Toronto Freedom Festival and Global Marijuana March at Queen’s Park in Toronto. The event boasts a peaceful history with no arrests and an estimated 3.5 million dollar impact on the city’s economy.

The official festival website states: “In 2007, TFF was developed to offer the necessary infrastructure for the 9th Global Marijuana March (GMM) that launches just north of the park. Toronto’s march is largest of over 200 participating cities, attracting over 20,000 people each year and garnering international media attention”

This year, for the first time in the festival’s history, the organizers had a difficult time obtaining a license from the city of Toronto, succeeding only weeks before the event date. The permit allowed for the renting of port-a-potties, building fences, hiring security, building stages and hiring food and product vendors.

What affected the event was the amount of entertainers and speakers available on short notice. As a consequence, there was only one stage as opposed to several. The organizers were also very clear about the politics of the event; decriminalization of marijuana, regulating the growing selling and consumption of cannabis, and freeing the “Prince of Pot” Marc Emery from US prison.

However, I felt there was some question as to whether or not this message was being heard by the extremely young attendees of the event. Regardless, with a record turnout the event is making an impact about the issues, even if their participants did not all go out and vote on May 2nd. 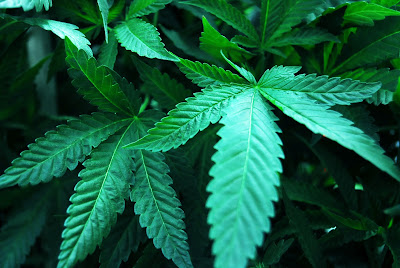 Arriving at 11am, there were already approximately 20 thousand people in the park, camping out on the grass and surrounding areas. Everyone was incredibly friendly and laid back. What I found particularly striking was the noise level. For a crowd of such significant size, it was not necessary to raise your voice in conversation. Everyone was there to have a good time. What I did notice was the lack of political signs in the crowd. There were several volunteers collecting donations and giving out information, interacting with the crowd. 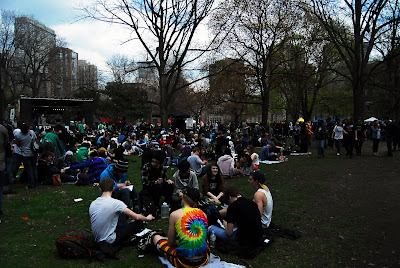 There were also a handful of street vendors and goods for sale, among booths giving out information about cannabis laws and selling marijuana paraphernalia such as bongs and rolling papers. We looked for a hacky sack at one point, but were disappointed. 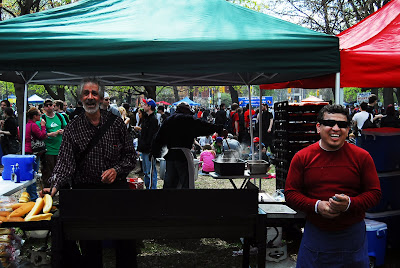 Everyone was in good spirits. In fact some of the people in the crowd were dressed in elaborate costume; the most exaggerated of these was “Bong Man” 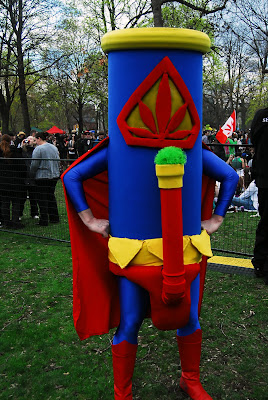 In the Media tent, I had the opportunity to talk to several event organizers and performers. Because of the last minute permit there was only one stage at the event, where in previous years there have been several. However, this did not seem to derail the enthusiasm of the crowd, growing to over 40 thousand people for 4:20, after which many of whom left the park to participate in the Global Marijuana March. 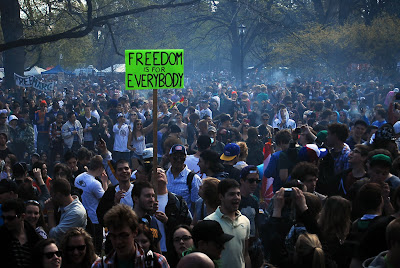 Most striking to me were the two incredibly strong women leading the crowd, the politicians, and activists. Jody Emery, whose husband has been incarcerated for selling marijuana seeds, and Alison Myrden, a political cannabis activist as well as Canada’s first medical marijuana patient. As a feminist activist, I really appreciated the power and presence of these women at this event. 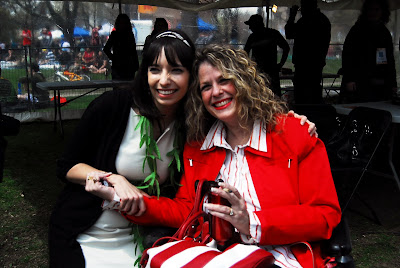 Jody Emery is member of the Green Party and a cannabis activist. She spoke on behalf of the magazine Cannabis Culture where she is CEO. She also speaks on behalf of the company’s former CEO and her husband, Marc Emery, in a bid to return him to Canada to carry out his jail sentence. 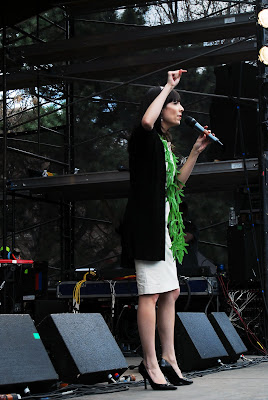 Alison Myrden, a former Canada Corrections Officer and lifelong MS patient spoke about the need to both decriminalize the drug for medical use as well as regulate it through governmental dispensaries in order to ensure safe and effective medicine for patients.

Stay tuned to this blog for an exclusive interview she did with Chase March for DOPEfm. 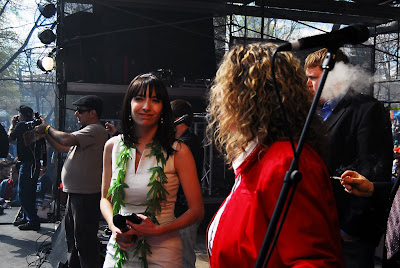 Both women had such a presence it was hard not to listen to them. Laughing, smiling, smoking, and in such incredible spirits in the face of a four-year conservative government and already having dealt with issues threatening the safety of the event. 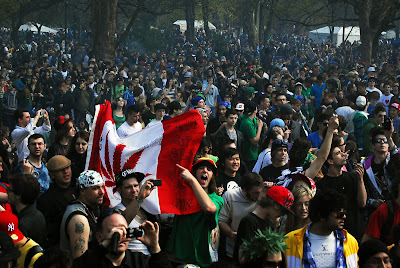 Here is a video of Alison Myrden speaking at the Toronto Freedom Festival in 2007, the first year of this large event centered around The GMM.

Every year the event has grown, and it shows no intention of slowing down.

This is a cause that affects so many people, yet one that is not represented in the popular media that often. For instance, did you know that over half of all drug arrests in the US are for cannabis related charges? (LEAP.cc).

We are led to believe that this is a harmful plant as well as to fear those who sell it, use it, or promote it. Perhaps we should make up our minds for ourselves? Below is a list of links to take you to further information about Jody and Alison as well as the causes they are fighting for.

Photography and Words by Dana Kathryn

The Ultimate “Link in Bio” Page

Carving Out Some Time