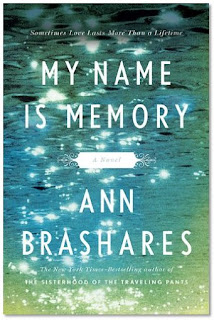 My Name is Memory by Ann Brashares

I really enjoyed this book. It was interesting to see all of the ways that the two characters connected throughout the years. The timing or circumstances were never quite right for them to finally come together to live happily ever after. But that notion of fairy-tale love is what keeps the main character going throughout the centuries. That’s right, centuries.

Daniel Gray knows that he is in love with Sophia. He met her briefly in 520 A.D. and he has chased her through all of his subsequent lives. She can’t remember her past lives so it is really hard to connect with her in each new life. That doesn’t stop him from trying though.

In 2009, it seems like he might finally be able to make that connection and be able to have a long and fruitful relationship with Sophia, who now goes by the name of Lucy and has no idea who Daniel is.

This was a nice read, right up until the ending. As the pages ahead of me started to dwindle, I started to get worried that this story wasn’t going to tie up neatly.

When I got to the last page, my fears were realized. I actually swore loudly at the book as I came to the very end. I rarely do that. This wasn’t the end of the story. I needed to know what happened.

I need closure when reading a novel. This one didn’t give that to me.

It seems that this book was originally planned to be a trilogy but even so, the ending should have wrapped up a little but better. And what if a sequel doesn’t actually happen? Then I will be let down by a book that I enjoyed right up to the ending. That’s not cool.

There is an Art to Asking

The Amazing Spider-Man is Back!