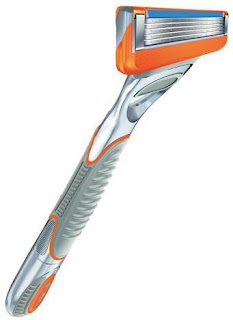 I remember when the first razor came out that had three blades and how the television commercials praised this system as an amazing shave.

Then four-blade razors came out.

And not to be topped, Gillette came out with a five-blade razor that had a sixth precision trimming blade on the edge of it. I got one of those as Christmas present three years ago and it is the only razor I have used since. I really enjoy the shave I get with my Gillette Fusion. I hardly ever cut myself anymore and I always have a close shave.

The commercials for this razor used to praise how effective the product was. Lately, however, the commercials have been reminding us that we need to replace our blades. Perhaps too many people are using the same blade for weeks and weeks. I know I am. And it’s not just because the replacement blades are expensive (although that it mostly the reason.) It’s because you can still get a good shave if you clean the blade well every day, even after a month.

So the commercials come along and tell us to change our blades. I find it hilarious that Gillette stopped telling us how great their product was and just started to tell us that we need to replace our blades frequently. I’ll replace my blade when it stops giving me a good shave, and not simply because an indicator strip tells me to.

And why are the blades more expensive than the starter kit with the razor, a fancy stand, and shaving cream. Does it make sense that four replacement blades should cost that much? I’ve spent a lot of money on your blades over the years. But I since like the shave and I am not about to get an electric razor (I don’t trust them) I guess I am stuck paying a lot of money for your cartridges. I just thought I’d complain about it.

We All Need Free TV

Save My Favourite Show