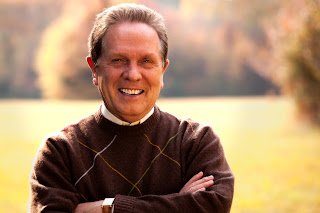 Today, we continue the interview I did with author Rick D. Niece. His latest book The Band Plays On: Going Home for a Music Man’s Encore is now available at bookstores everywhere.

If you missed Part 1, you can go back and read the transcript from the very beginning.

Chase: “Your father sounds like an amazing man. I know that he was in the military, he was an educator, he painted houses in the summer, he conducted the church choir, and he even started a bowling alley because you didn’t have one in your small town.”

Rick: “My dad never liked any idle time. He decided that the town needed a bowling alley. It was called The Duck Inn. He ran that for about five or six years. It was a good experience too. We didn’t have automatic pin-setters. We teenagers would jump down in the pits and set the pins and get up out of the way after the person had bowled. My dad continues to be such an amazing role model for me.

Part of the theme too, Chase, and you probably picked this up, is the theme of echoes. The introduction talks about a specific Memorial Day when the band marched to our hometown cemetery. We always ended every concert with John Philip Sousa’s ‘Stars and Stripes Forever.’ But then, there was a point near the end of the ceremony when I would leave the ranks of the band and go over to the single hill in the cemetery. My dad would play ‘Taps’ in front of the veterans who were under a canopy tent. At the time. there were still World War I Veterans alive, Over the hill, I would play the echo.

I can remember, as a little kid, how nervous I was. I would just pace little boy circles as my dad was playing. My dad always played perfectly and the title of that chapter is called ‘Echoes can Make No Mistakes.’ That idea that I’m his echo and I can’t make any mistakes.
I think that my whole life, I have been my father’s echo, not that I can’t make mistakes, but I like being his echo because what I echo, then, are also remnants of his echo. Part of the theme of the book is generational as well and how the echoes are so important and that we need to listen to them and sponge them up. We, in time, become the echoes for the generation prior.”
Chase: “That’s really touching, but at the same time, did you ever feel that you were trapped in the shadow of this great man and it would be hard for you to live up?”
Rick: “This is something that I don’t think I’ve told many other people before, so you get a scoop on it. Two things to answer your question. Number 1, I fought going in to education because I knew I could never be as good a teacher as my dad. It wasn’t until the end of my sophomore year in college that I decided that I wanted to teach. The thing I haven’t told many people is that I started college as a music major.
I went to Ohio State University, tried out for the marching band there, I was an alternate and really ended up being in the Grey Band. They had a Scarlet band with people who were primarily music majors and really tough to compete with. So I wasn’t as great as I thought I was and ended up in the Grey Band. I realized then, I had the passion for music that you have, but I didn’t think I had that passion to teach it, so I ended up being an English major and teaching English.
My dad was so revered and so respected, that there was a shadow. This is in no way to sound negative. It was not negative. But I decided I could be a good teacher and really learn from my dad. If there was one lesson that I learned from my dad about teaching, and it’s the simplest lesson. You’ve been an educator for nine years, you’ll know exactly what I’m saying because I think some people forget this lesson, is that students always come first.
Students are the purpose for schools and education. Chase, I’m amazed at how many people, including teachers, forget that.”
Chase: “I understand that, but I also understand that there is a bit of a battle going on against teachers. Right now in Ontario, the government is trying to take away some of our gains.
I totally agree with you, but at the same time, teachers overall, especially elementary school teachers are kind of looked down upon, like we are not important. I think we really need to give our teachers more. We need to give them the tools to do the job and make sure that we can put them first, so in turn, we can put students first. I know that sounds complicated but it’s not.”
Rick: “I’m the president of a university. Faculty members have a great job but I think we forget that it’s not a hierarchy. It isn’t vertical with the kindergarten teacher at the bottom and a full-tenured professor is at the top. It’s not vertical. We all play our parts on a student’s education on a horizontal plane. Every one of those teachers is important, but if you don’t have the resources and build at the second or third grade, it becomes difficult as students progress.
I’m also amazed that teaching is such hard work. You’re tired at the end of the day, and then you go home and prepare for the next day, you prepare lessons, and you grade papers. I’m not complaining about it, not at all. I just don’t think people realize how difficult it is to be a teacher.
Part of what I want in this series of books, is to try to get people to understand how important our education is, that it follows us, and that teachers do amazing work.

When I was a kid, being raised in a small town in Ohio, I had four support systems that were watching out for me all the time. I had my family. I had my school. I had my church. And I had my small town community, that in a sense was like a second set of parents. Unfortunately, there are some kids today who don’t have any of those, and it becomes all the more important for us as educators to try and provide all those things for students.

* there are a few parts of this interview that I have not transcribed (due to some time constraints) so if you listen to the interview with the player below, you will hear bonus content. You can also download the podcast for free. I hope you’ve enjoyed this interview, my very first one with an author. *