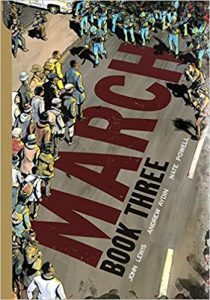 This is the final book of a trilogy series that focuses on the challenges and horrors faced by those in the Civil Rights Movement as they fought to be recognized as human beings and awarded the rights that go along with that. It is told by one of the movement’s most pivotal figures, John Lewis.

In March: Book One we get to see him finally see the day when a black man could become president. It’s a touching moment to see him interacting with Barack Obama and reflecting on the long journey it took to get there.

The story is horrific and I have a hard time believing that these atrocities were happening only fifty years ago. It’s amazing to see the strides that were made with the non-violent protests that were staged. The men and women who fought the injustice and poor treatment of their race didn’t take up arms. They didn’t retaliate any of the violence that they were shown. They simply stood up and demanded to be taken notice of. It truly is inspiring and I am glad this story has been told. 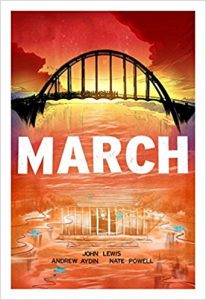 The entire trilogy is now available in a slipcase set that includes all three books in a beautifully illustrated case.

The Death of Wolverine