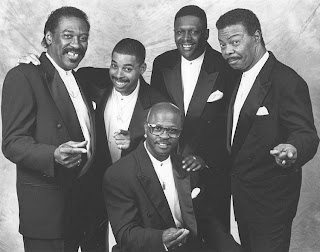 Let’s continue our interview with legendary R&B group The Manhattans as recorded from the green room of the bandshell at the Canadian National Exhibition earlier this year.

If you missed Part 1, you can go back and read it now, you can download the entire show for free, stream it with the player below, or just continue reading. Thanks for tuning in.
Chase: “I know certain times I have been in the grocery store or elevator and have heard a song, and thought, ‘I know this!’ And then there’s no rapping on it and it’s like, ‘Oh, this is the original.’ It’s really interesting when you discover that. It’s in honour because we have to respect the past and the great musicianship that we are able to draw from for hip-hop.”
Al Pazant: “But all of that is what keeps us alive.”
Lee Williams: “That’s right.”
Al Pazant: “It keeps the demand there. And that’s a good thing.”
Chase: “Normally everyone we talk to for DOPEfm is an up and coming artist. They usually have day jobs. So I wanted to ask you guys, do you have day jobs or is music it for you guys?”
Lee Williams: “This is what we do now.”
Charles Hardy: “I retired twelve years ago.”
Lee Williams: “I’m retired. This is it. This is all we do.”
Chase: “How often are you playing shows then?”
Al Pazant: “It varies. This is our full-time job. It’s not like we’re punching a card. Sometimes it might be five or six times a month. It might only be twice. It’s just how it goes.”
Lee Williams: “And we do a lot of casinos. That’s where the money is at.”
Charles Hardy: “Where the economy is at right now, it’s not as fruitful as it was back in the 70s and 80s. People will pay to come see you, if it’s not a necessity. There are always priorities, like family, things you have to put into perspective. Coming to a show is all great, but if had to choose from coming to a show or paying your rent, what would you do. So priorities fit in there too. We’re just happy that people still come out to support us, just like they do for The Spinners, The Stylistics, I could just go on with different names.
It’s something to see the masses that come out to support you. And yet, there is not a genre of the radio that they can put us in to. It’s either we’re too old. They call it oldie-but-goodies. Or we’re not with what’s going on with the times. People always want to hear what we did before. It’s a Catch 22.”
Al Pazant: “You don’t want to get categorized as an oldie-but-goodie group. You’ll find an artist who has a recording studio and he’s out there and nearly 80 years old. He’s coming out with a new hit record very soon. And he refuses to let them put him in the oldie-but-goodie category. Tony Bennet, is who I’m speaking of.”
Lee Williams: “So we shouldn’t lay down ourselves. We need to keep the name of The Manhattans. It’s a stature just like the city. When Sonny Bivins was in Jersey and they looked over and saw the Manhattan skyline, they thought, ‘This is a stature,’ and so they took the name. From that, it has blossomed out for many years. Out in to the 70s.”
Charles Hardy: “’Kiss and Say Goodbye’ was in the 80s.”
Lee Williams: “We haven’t stopped, we haven’t laid down, and never will. We go on and on and on.”
Chase: “One of the former lead singers of The Manhattans even did some hip-hop, Gerald Alston. He appeared on a Wu-Tang Clan record in 2007. So you guys continue to put in work, wherever you are. That’s cool!”
Lee Williams: “I’m the lead singer now.”
Chase: “You’ve had a couple of leads over the years.”
Lee Williams: “Oh yeah, yeah. That’s good. He’s a good lead singer. We can’t put him down. With The Manhattans, where we are today, Gerald Alston was there. I was supposed to have been there before but I had my group Lee Williams and The Cymbals. They came and they wanted the sound like I had. They picked Gerald Alston, and he was a great choice.”
Chase: “I think the most recent album you guys put out was in 1994. Manhattan’s Now. So you guys have been active since ’64, put out something in ’94, and now getting ready to put something out in 2011.”
Lee Williams: “That’s right.”
Al Pazant: “Hopefully, yeah. We’re working on it.”
Lee Williams: “We want to be able to come out and surprise the people, the followers we have now. It will be happening.”

Read the conclusion of this interview.

Read Part 3 of this interview.

The Podcast Is Fading Away